Video of this song from youtube
Average Rating : 4.75
Total Vote(s) : 71
Please rate this song between 1 star and 5 stars (5 stars being the best). Just move your mouse on the stars above and click as per your rating. Your rating will really help us to improve our website. 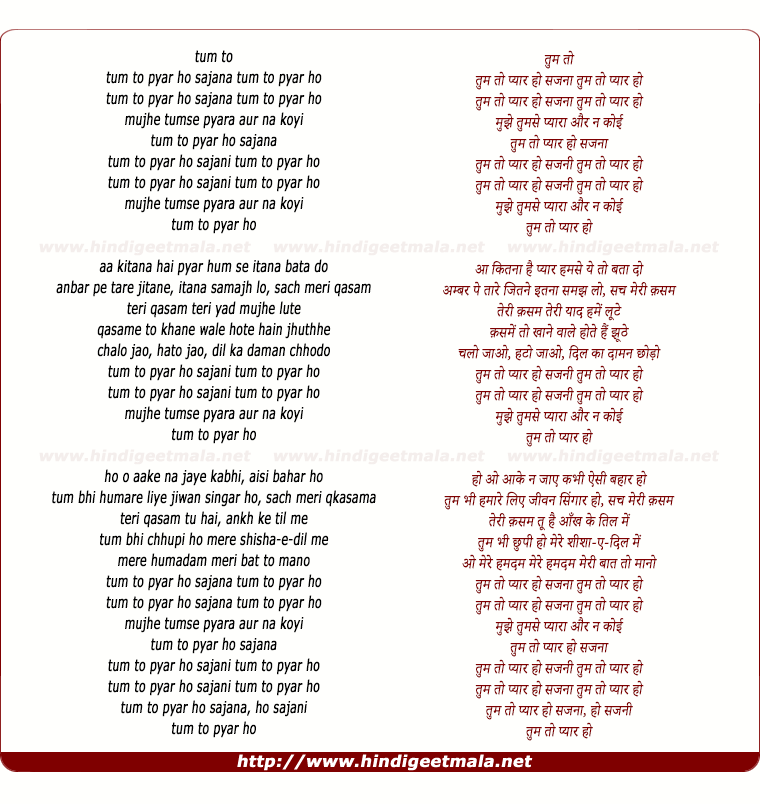 Comments on song "Tum To Pyar Ho Sajni, Mujhe Tumse Pyara Aur Na Koyi"
Sreepada RAMA NAGESWARA RAO on Friday, June 12, 2015
"Tum to Tum to Pyaar Ho sajana, tum to pyaar Ho sajani" from film SEHRA
sung by lataji and Mohmadrafiji, music composed by Ramlalji. A very sweet
music given by Ramlalji for the song. It is of 1963 film. late 80's on
wards I used to listen this song. A nice cinematographic song. I like the
song, music for ever. A rare appearance of Ramlalji music in the
Bollywood but for me he was one of the best music director.﻿

Mritunjay Kumar on Wednesday, August 18, 2010
@Mahagedara2 u seem to be from Sri Lanka. I wanna tell u that this song
belongs to category of Unforgettable classics. This is more so because the
Music Composer, RamLal Chowdhary has composed music independently for only
two movies, Sehra (1963) and Geet Gaya Pattharon Ne (1964) and both these
films are remembered for their outstanding songs and their composition.

Mritunjay Kumar on Wednesday, August 18, 2010
@Mahagedara2 yes, I can do it for you. The translation is as follows : You
are such a spring season in my life which I wish never to end up (Male),
You are also the beauty of my life (Female). I swear for you, you are the
mole in my eye (Female), You are also hidden in the mirror of my heart
(Male) I hope it will serve the purpose.

Naveen Dighe on Friday, February 18, 2011
THE MUSIC DIRECTOR OF THIS MINDBLOWING SONG WAS RAM LAL WHO DID NOT COMPOSE
FOR TOO MANY FILMS AND THE LYRICIST WAS THE FAMOUS HASRAT JAIPURI THIS
COMBO OF RAMLALJI AND HASRATSAHAB WERE SOON TO GIVE ANOTHER PATH BREAKING
IMMORTAL MUSICAL MASTERPIECE GEET GAYA PATHORENE FOR THE SAME PRODUCER V
SHANTARAM