Video of this song from youtube
Average Rating : 4.26
Total Vote(s) : 1124
Please rate this song between 1 star and 5 stars (5 stars being the best). Just move your mouse on the stars above and click as per your rating. Your rating will really help us to improve our website. 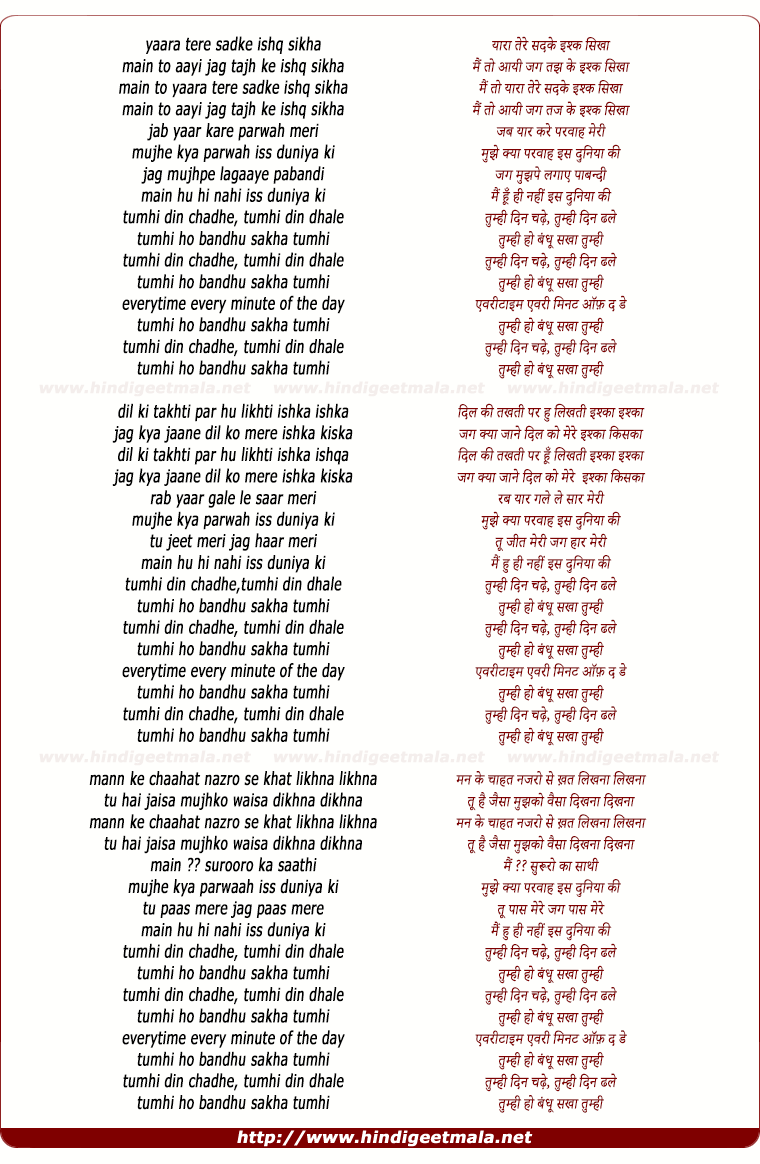 Comments on song "Tumhi Ho Bandhu Sakha Tumhi"
oshsam on Sunday, July 15, 2012
Wonder why people r calling Diana ugly... She's a pretty girl. Ria Sen also
is very pretty. And coz she resembles her, makes her ugly just dosn't seem
to make any sense... Does need to get a good acting coach soon though n she
will surely go places. This was only her first movie. She has been a
much-sought n successful model n maybe she will strike gold in Bollywood.
Haters will always remain negative coz eating ur own bitter hateful words
is very painful indeed... Luck to her. :)

Sady shr on Saturday, July 14, 2012
I specially logged in to comment here... Seriously.. if anyone is looking
for a nice movie and a true opinion about this movie then I wud say...This
isnt the one.. Extremely slow and the "typical" movie...u can almost
predict everything that happens next in the movie... Plus saif is too old
for this role and the girls are taller than him... Sheer disappointment I
would say !!!! No Offence..!!

gurmeetmangat on Monday, July 23, 2012
It is well known that composer Pritam's compositions are mostly based on
popular oldies but his way of presenting them in modified form (Rhythm and
Harmony) is always catchy and that is why he is successful. Listen to "Dekh
tere insaan ki haalat kya ho gayee Bhagwan ki kitna badal gaya insaan" sung
by the poet and lyricist Pradeep himself and compare.

TheHyperAwesome on Sunday, June 24, 2012
If you don't like it, don't watch it. Nobody is forcing you to. Stop with
the hate comments! Indian cinema cannot be like it used to be! Change is
important, everywhere. As we are growing and changing, cinema too needs to
change. Stop cribbing. If you're so disturbed, watch old movies! Watch
movies on topics you like.