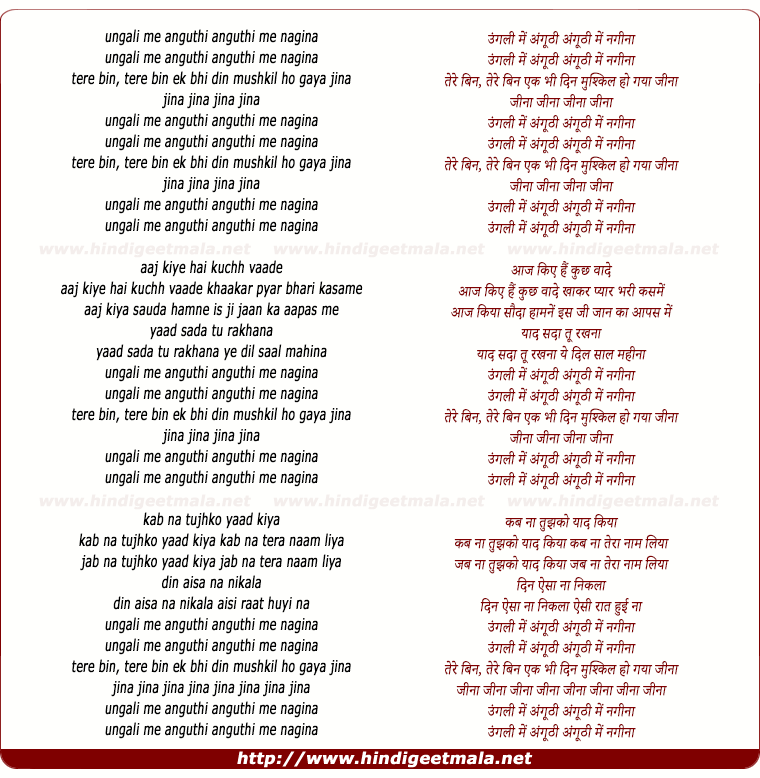 Comments on song "Ungali Me Anguthi, Anguthi Me Nagina (Duet)"
Ismail Khilath Rasheed on Monday, April 27, 2009
Sri Devi and Sunny Deol's pairing was a rare occurrence. They thought it
might not work but actually did! And I think just to be sure, the director
got Anil Kapoor on board, because after "Mr. India", a lot of people
thought Anil and Sri Devi's pairing was "rabne banaadi jodi" just like
Shahrukh Khan and Kajols onscreen pairing is considered today. This film
has beautiful cinematography and very colorful too!

naj hussain on Thursday, June 04, 2009
nice song from mohammed aziz and lata. muna aziz as they called him and
shabbir kumar ruled bollywood singing mid-80's to late 80's. miss their
singing. even thou my fav singer now are udit and sonu nigam.

bigmac19751234 on Sunday, March 14, 2010
I love this song...brings back good memories.Sri Devi was the best in
Bollywood.and untill now NO-ONE is close to her status...and her dignity.

ERUMBAIG on Monday, February 16, 2009
wow love this video and sridevis dancing
and very romantic too.thanks halimali.love the scenery too,where was it filmed.?? if you no.