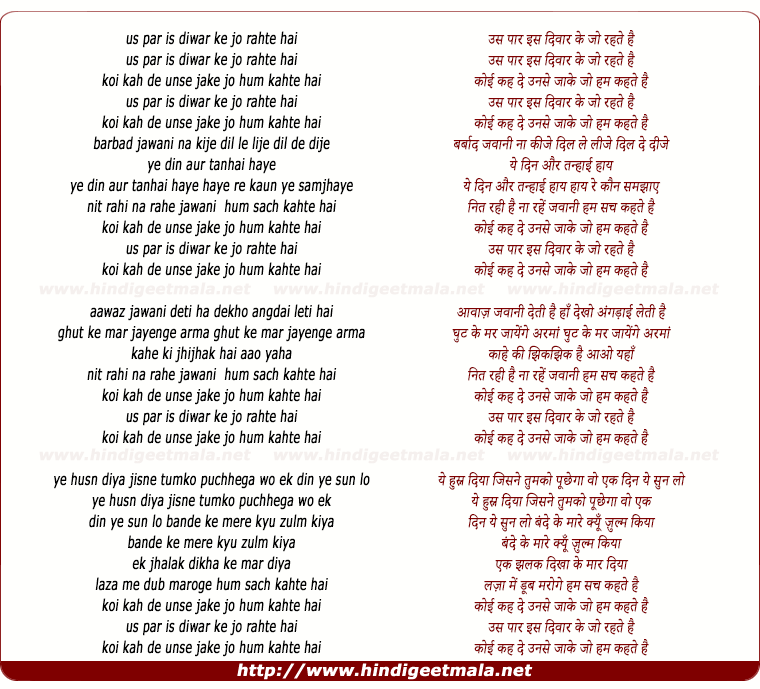 Comments on song "Us Par Is Diwar Ke Jo Rahte Hai"
Nayyar Kamal on Tuesday, June 25, 2013
Saiyan was the indian version of DUEL IN THE SUN n Sajjan played Gregory
Pecks' role superbly.He was a very talented but unlucky artist n never got
due recognition.

rumahale on Wednesday, November 26, 2014
The learned viewers have described vividly; I continue to enjoy listening
and viewing video clip. Thank you for the best initiative in sharing this
rare gem.﻿

rekhalalit on Monday, July 12, 2010
Mohammed Rafi Sahab is always superb & awesome . Uncomparable voice.In his
entry time he sung so many good songs. This is the example of one of his
melodious song picturised on Actor - "Sajjan". This film is -- "SAIYAAN" &
actress is beautiful Madhubala. Later on this actor Sajjan played a famous
role of "Betaal" in Ramanand Sagar's TV Serial "Vikram aur Betaal" in
1980's. Prince Lalit Bhambhani Atlanta, Georgia ( USA )

Nasir Ali on Thursday, April 28, 2011
A novel song in all sense: Beautiful Madhubala, Handsome Sajjan, Eccentric
Sajjad Hussain as MD, Multi-talented Madhok as lyricist and the Rising Star
of the Fifties Mohammed Rafi Sahaab as the playback singer. BTW, I think
Jeetendra must have been inspired by Sajjan's jumping jack style!