Video of this song from youtube
Average Rating : 4.71
Total Vote(s) : 21
Please rate this song between 1 star and 5 stars (5 stars being the best). Just move your mouse on the stars above and click as per your rating. Your rating will really help us to improve our website. 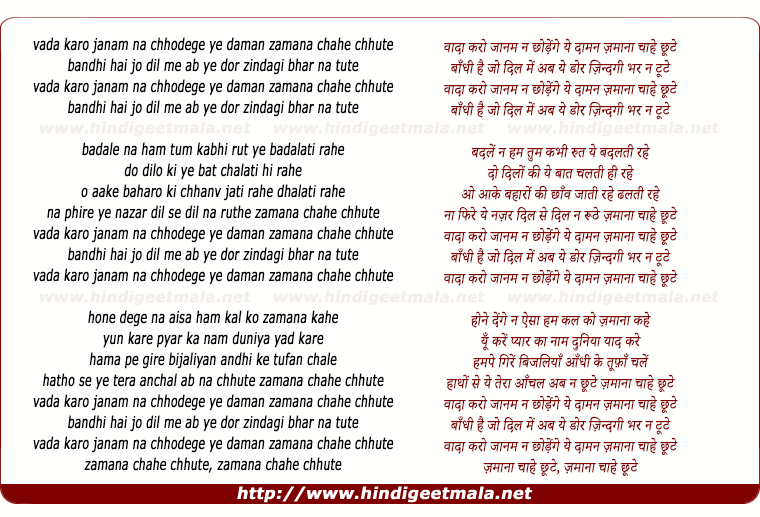 Comments on song "Vaadaa Karo Jaanam Na Chhodenge Ye Daaman"
soumyasbh on Sunday, July 26, 2009
the confusion which is prevalant among many people thinking a R D Burman
tune is very common... the songs has RD touch all over.. the
reason is that even though factually it is Basu Monohari's song, he was a
steady assistant of RD all thorughout... hence, it is inevitable that
the touch will be there nonetheless. the same happens if u listen
to few songs of Jaidev or N Dutta and u may confuse them with SD tune..
coz they both were SD assistants...

Archisman Mozumder on Sunday, March 17, 2013
Basu was Basubeb Chakrabarti, a music-arranger in the Burman Camp. Actually
both Basu & Manohari were first given a break by Salil Chowdhury & S D
Burman. Since RD was the assistant music director of SD right through the
1960-s, the bonding between him & Basu-Manohari strengthened. (Another
great musician of the Burman camp besides these two was Marutirao Keer, the
master arranger of percussion/beats in the Burman camp.)

Himanshu Joshi on Thursday, October 24, 2013
It is very easy to take the credit from a music director by labelling him
as RDB or SDB. Jaidev was a school in himself.. No way he resembled
SDB after his comeback in 1970s.. This song has a typical stamp of Basu
Chakraborty's style. People who know his style can very easily connect
to it. Listen to "Dono Ke Dil Hain". The song has too many
resemblances to this song's antara.

Nomita Chakravorty on Tuesday, November 10, 2009
Beoootiful no. Manoharida may have been heavily influenced by Panchamda.
Artists are free to get influenced. Everyone including Panchamda were
inluenced at many points. To give him Manoharida due credit.. This is
beautiful and a sweet composition. Ofcourse Kishorda and LAtaji are as
usual par excellence.