Video of this song from youtube
Average Rating : 4.37
Total Vote(s) : 108
Please rate this song between 1 star and 5 stars (5 stars being the best). Just move your mouse on the stars above and click as per your rating. Your rating will really help us to improve our website. 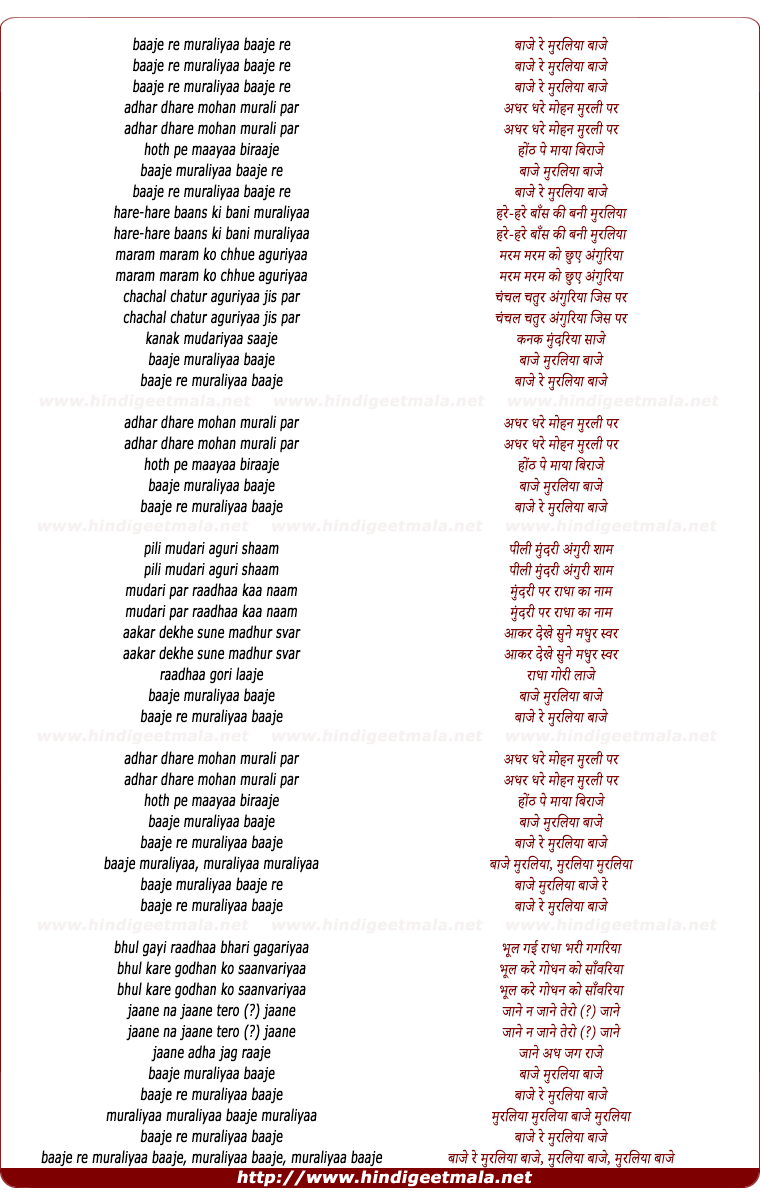 Comments on song "Vimukh Shikhar Se, Baaje Re Muraliyaa Baaaje"
RanjitMorey on Saturday, August 27, 2011
Kishoriji would've been the perfect ornament to this song. I say this not because she is a better singer than Lataji, but because she is actually devoted to Sri Krsnacandra.
shriniwasd09 on Monday, September 26, 2011
Great devotional song...Lyrics by Pt. Narendra Sharma , sung by all time great singers Lataji and Late Pt. Bhimsen Joshi..AND above all music by Srinivas Khale a famous and legendary Marathi music composer who recently passed away. May his soul rest in peace.
kumar bhagwat on Friday, February 27, 2009
What a pity that such a wonderful musical treat by the GREAT MAESTROES
which all of should be proud of has only one comment so far. GOD BLESS THE
DUO and thanks weirdindia for this lovely feast. Kumar N Vimala

ytub7 on Sunday, May 10, 2009
BHARAT RATNA Lata Mangeshkar and BHARAT RATNA Pt. Bhimsen Joshi...make me a proud Maharashtrian and Indian...Nice Bhajan and God Bless Both!!!
Nitin Mokashi on Wednesday, September 10, 2014
This record was published in mid eighties, due to some prior engagements
dates of both legends could not be obtained at the same time. Both the
artists recorded their part of this record (not only this song) separately,
in entire record they never sing simultaneously. Audio Mixing was not of
the level as it is today, if one listens to this song on sophisticated
amplifier, minute tonal difference in the instrument recordings is clear to
everybody, almost patchwork !! This does not undermine the greatness of the
composition and end result, just a trivia, that's all !!﻿