Video of this song from youtube
Average Rating : 4.33
Total Vote(s) : 27
Please rate this song between 1 star and 5 stars (5 stars being the best). Just move your mouse on the stars above and click as per your rating. Your rating will really help us to improve our website. 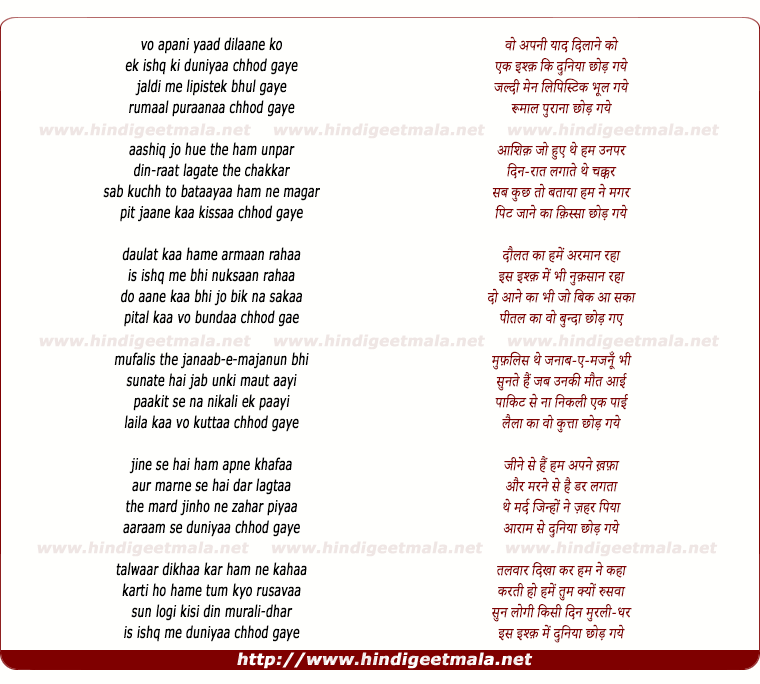 Comments on song "Vo Apani Yaad Dilaane Ko"
rekhalalit on Friday, June 04, 2010
I think that this Rafi Sahab's appearance is in film -- "Jugnu". There is
Dilip Kumar & Noorjahan in this film . When this song was picturised on
Rafi Sahab, then Rafi Sahab didn't knew that one day he will be the great
singer & great man in this world. There is one MOON, One SUN & One MOHAMMED
RAFI SAHAB in this world . No one can compete him. We always respect him.
from: Prince Lalit Bhambhani Atlanta, Georgia ( USA )

MoleculaRafian on Tuesday, August 18, 2009
I agree with AmarRafi. we are blessed that he chose to sing for us. OMG,
but Rafi does look Young-handsome in this one. Love this upload. Tauseephy,
make it a great day, SS

Aartib40 on Friday, July 31, 2009
Thanks for this upload GREAT upload!!! Nice to see Rafi Sahaab in a movie :)
AmarRafi on Wednesday, August 12, 2009
Thank you for this rare treat. In a way, it's a good thing Rafi did not go into acting - we would never have been gifted with all these thousands of brilliant songs of his, as he would have been severely restricted by the film productions.
moon75866 on Tuesday, August 28, 2012
Rafi must be 20 or something here.Jugnu was a pre-partition film & he was
born in 1924.