Video of this song from youtube
Average Rating : 4.27
Total Vote(s) : 132
Please rate this song between 1 star and 5 stars (5 stars being the best). Just move your mouse on the stars above and click as per your rating. Your rating will really help us to improve our website. 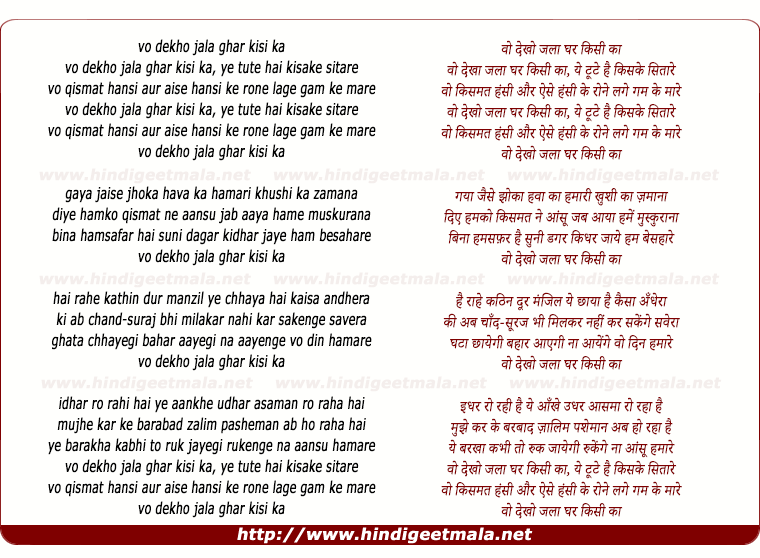 Comments on song "Vo Dekho Jalaa Ghar Kisi Kaa"
SANJEEVKKELKAR on Sunday, August 26, 2012
DEAR NMD41, YES, CERTAINLY THE PATHOS IN THE SONG IS DUE TO RAAG AASAAWARI. BUT MADAN MOHAN HAS USED KOMAL RISHABH AASAAWARI. THIS IS THE ONLY TUNE IN ENTIRE HINDI FILM MUSIC BASED ON THIS RAAG, WHICH HAS RENDERED THE SONG ALL TIME CLASSIC AND TIMELESS.
Amrik Singh on Friday, October 21, 2011
What a song my dear. Somtimes I dont know.Thats it. I used to listen this song those old days again & again. Thanks for this great upload.
777humble on Saturday, May 21, 2011
This is a pining and heart touching song by lata jee. The lyrics is awesome. I cant stop my tears after listening this song. Evergreen!!!!!!!!!!!!
vinutha fartale on Thursday, August 16, 2012
mala sinha had worked in such few hindi films which give lesson or teachings to the society like anpadh, dhool ka phool
balochrulz on Sunday, September 19, 2010
lata voice madan mohan music raja mehndi ali khan lyrics aur kia hosakta hai sirf ek lasani aur kamal gana
View all 15 comments related to song Vo Dekho Jalaa Ghar Kisi Kaa
Popular Links on HindiGeetMala