Average Rating : 3.91
Total Vote(s) : 44
Please rate this song between 1 star and 5 stars (5 stars being the best). Just move your mouse on the stars above and click as per your rating. Your rating will really help us to improve our website. 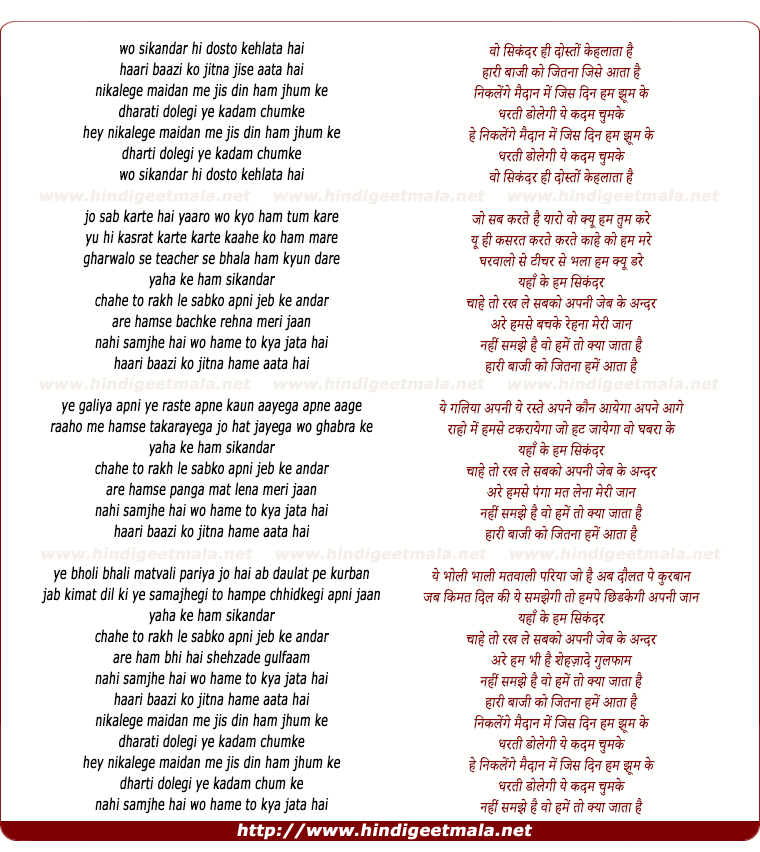 Comments on song "Vo Sikandar Hi Dosto Kahalata Hai"
Sadbhav Shrestha on Tuesday, February 23, 2010
khizar 129 this is not copied from hollywood and not just 10 seconds but
the whole song is stolen by the music directors. Its a song called Pinball
Wizard by The Who.. listen to that song and tell your music directors that
how they are making you fool by stealing the western from the past till
now.

abhijoe95 on Tuesday, May 05, 2009
really nice movie and songs are really meaningful.and if it is an amir
khan movie then it has more than one reasons to be special.really loved
and cherished the movie.and ya as minal says the movie is by for and of
the winners...really motivational film!!!

Hitesh Sharma on Thursday, August 13, 2009
one of the better movies that have ever been made in indian cinema. my all
time favourites, can watch24*7*365 ayesha jhulka ..one of the most cutest
actress of all time... Really a fab fab movie...

sohaibmansoor on Friday, August 29, 2008
oscar deserving movie.. jury doesnt understand the meaning of good cinema..
but finally aamir has proved, and convinced everyone with his ideologies..
go aamir!!

chanderkent on Tuesday, February 18, 2014
whenever i am low and fighting against all odds like the whole world
against me the i listen to this song and i get charged.﻿