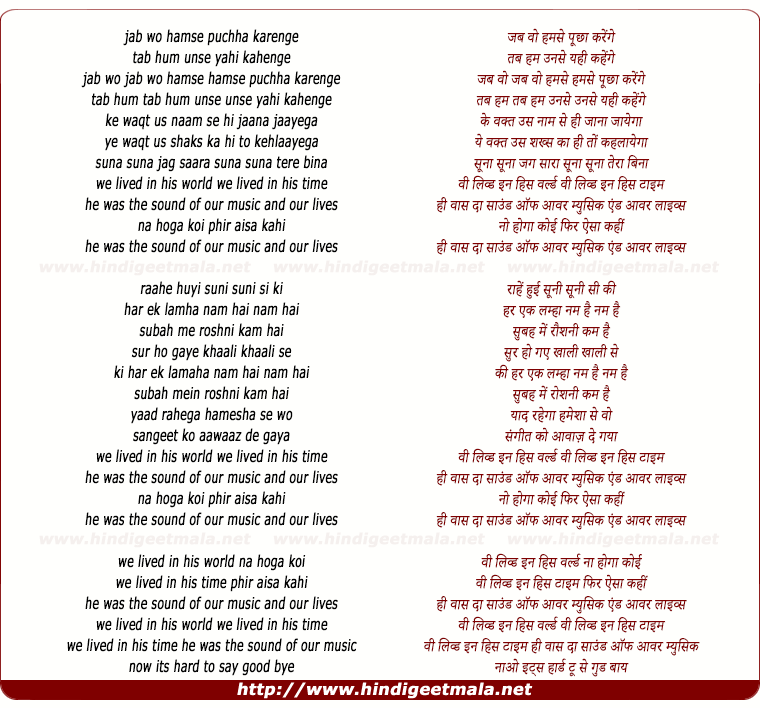 Comments on song "We Lived In His World"
jaykid160 on Sunday, December 05, 2010
@sthitadebasis MJ's life was ruined because of lies and roamers. And at the
time there was all this stuff going around of MJ wanting to be a woman and
he turned himself white. And we all know that these sort of talk hurt MJ
very very much...So even if SRK has a great funny sense of humor, i thought
that was not very good of him to say. Especially if its his 'idol'

blankblank1985 on Saturday, August 29, 2009
what were they thinking??? this by far the worst bollywood video i have seen (one of the worst) awful production value... if they didnt have time/ money they should have just made a cover version of one MJ's songs with less star cast.even a song with lyrics would have been great.THIS IS AWFUL!!!
jaykid160 on Monday, October 18, 2010
@sthitadebasis You want proof? Have a look on youtube for the video when he
said that story about power, he said "Michael jackson went from being a
black boy to a white women". I am not just saying these things. I like Khan
very much, but i just didnt like what he said about mj. OK.

rhondaeyes on Thursday, September 17, 2009
Very nice tribute. Too bad USA missed out on a such big hearted spirit.
even though I live in Miramar, Florida I truly love & respect MJ. He will always be in my family hearts.
Imagine the music he is playing now and with whom!!! can't wait to see him again. Rhonda

SUREBOY40 on Saturday, August 29, 2009
Mike, thanks for the soundtrack for my life! you push me away, with your talent, i sing an earth song, i have a pyt in my life, i always wanna be starting something, and i never can say goodbye to you! i just can't stop loving you!
View all 30 comments related to song We Lived In His World
Popular Links on HindiGeetMala