Video of this song from youtube
Average Rating : 4.47
Total Vote(s) : 1008
Please rate this song between 1 star and 5 stars (5 stars being the best). Just move your mouse on the stars above and click as per your rating. Your rating will really help us to improve our website. 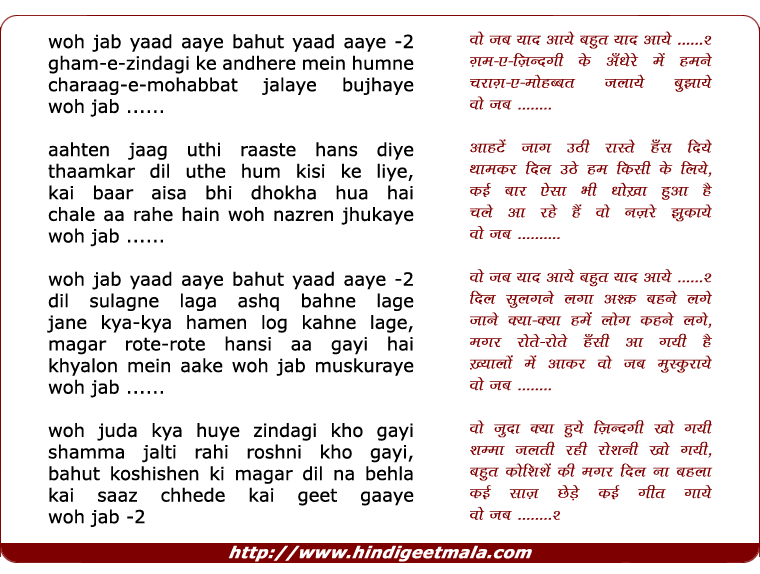 RituPM :) FEELThePurityPeace&DepthINMusicINYourShr on Tuesday, December 23, 2008
"How can I change the tide of this cruel time and revert it back to those
golden days when people use to hear these kinds of gems." They still do!:)
Thanks to youtube, as far as I know:) Thanks to the tech savy aficionados
who upload these vintage gems for us all to enjoy & cherish, and in our own
ways we, by talking about it, promote & preserve the charm & beauty of this
kind of music! So, don't despair. :) There still are many who treasure &
listen to these kind of gems! Best Always. Ritu USA

MsSVasan on Thursday, June 19, 2008
Correction.THis song is from the moviePaarasm ani.The song"Saaranga Teri
Yaad Mein"is quite a memorable song as well.I am not decrying the
song.but feel that, for the depth of meaning,pathos,sweetness&melody,an
actor like Dev Anand would have suited this song with either Waheeda or
Sadhana or any of the below Even Sunil Dutt, GUru Dutt, Balraj Sahni or
DilipKumar would have been quite appropriate. Dev Anand's voice had a lot
of romance&Rafi's Voice fitted Dev's Persona &Voice like no Other.

MsSVasan on Friday, August 01, 2008
I know,Only in later years, Latajee&Rafi Sahib had a fallout(disagreement
over whether a %Of the sales revenues generated by the royalties also went
to the PBsingers. Hailing from Punjab,Rafi Saheb was easy going,
gregarious& possibly did not really care 4the monetary gain/profit.Latajee
was quite shrewd &it looks like she had edged out the competition in later
years 2reign as the Supreme Nightingale(Granted, she is truly
gifted),however Sumanjee was quite a match with her equally sweet voice.