Video of this song from youtube
Average Rating : 4.50
Total Vote(s) : 38
Please rate this song between 1 star and 5 stars (5 stars being the best). Just move your mouse on the stars above and click as per your rating. Your rating will really help us to improve our website. 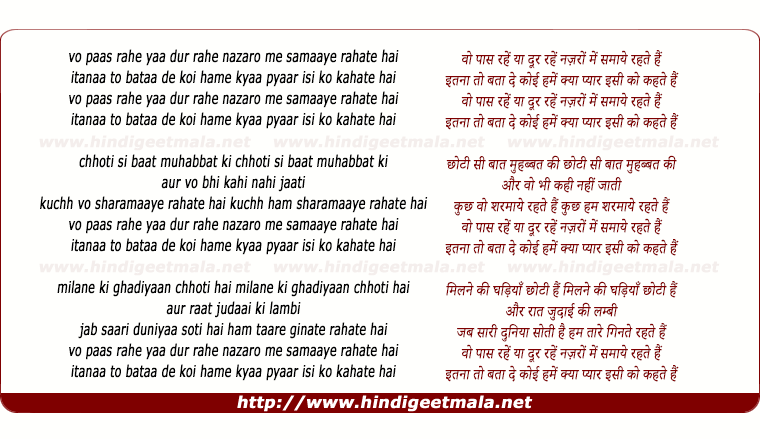 Comments on song "Woh Pass Rahe Ya Dur Rahe"
RituPM :) FEELThePurityPeace&DepthINMusicINYourShr on Friday, January 09, 2009
Aww what an adorable sweet song! :) The scene it's featured in is just as
cute, how he walks her home, her socially expected suppressed passion and
longing for him erupting in a song. Gosh, the lyrics are just sooo cute,
romantic and innocently expressive! Love this refreshing song! :) These
songs leave you with a smile lingering on your face . wow! the power of
music on our minds .. love it. Thanks! Regards, Ritu

himsingz on Monday, December 28, 2009
My humble opinion too. She and Geeta Dutt had mature voices with powerful
mood-capturing expression. They were the best after KL Saigal. Others were
excellent too, but din't have the soz these two could put into their
singing..

rumahale on Thursday, January 08, 2009
It is a popular hit song for olden days. Suraiya besides acting has proved
worth in good singing. Thanks for the upload.

umraochalsani on Sunday, July 05, 2009
In my wish list too. Thank you so much Mirza saab. Did Suraiya ever put a
wrong in her singing? I wonder. Had she chosen to be a payback singer, She
would have given Lata a run for her money, even though Lata was always the
greatest female singer ever. There was some indefinable allure in suraiya's
voice. Pl. Keep it up Sir. Do you happen to have the video songs of Ustad,
an O.P.Nayyar film?