Average Rating : 4.31
Total Vote(s) : 75
Please rate this song between 1 star and 5 stars (5 stars being the best). Just move your mouse on the stars above and click as per your rating. Your rating will really help us to improve our website. 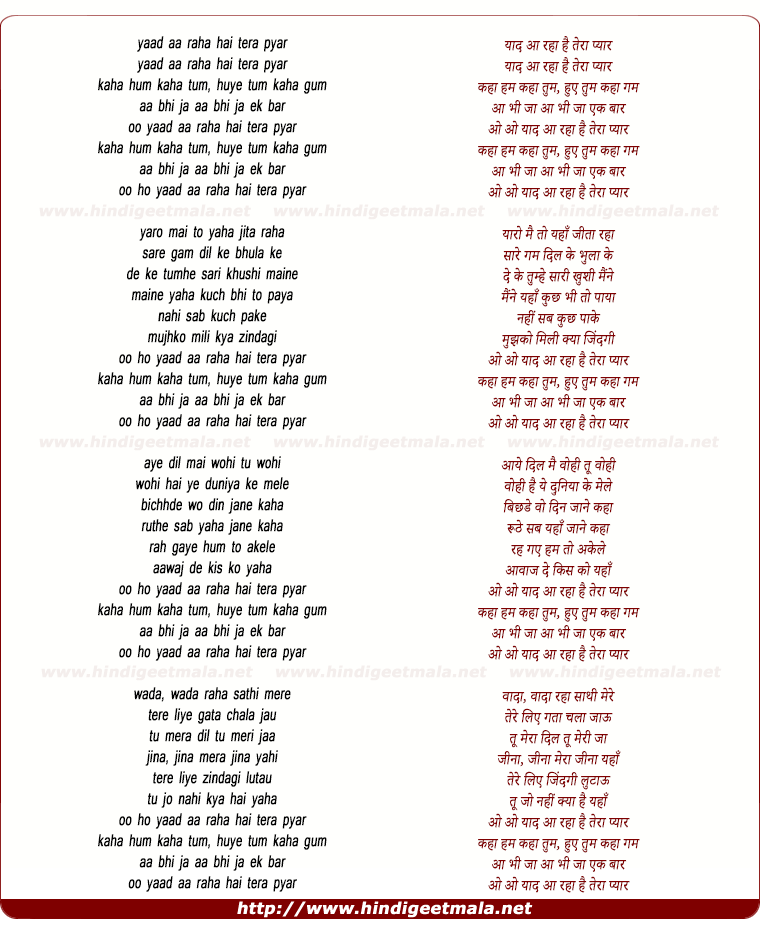 Comments on song "Yaad Aa Raha Hai Tera Pyar, Kahan Hum Kahan Tum"
kashishrose on Wednesday, April 11, 2012
handsome mithun best dancer of em all and will always be, he had his own unique style, great actor, wish they do a remake of one of his disco dancing movies with him init doing his own unique style :)
poovu1 on Tuesday, November 08, 2011
Bappi-da's Music makes anybody dance. Pioneer of western music in India. Nayagam. worthwebwaydotcom.
DamallaX on Sunday, October 16, 2011
All over the world!
80s was the best decade for music regardless of which tongue.

Razor Edge on Friday, July 06, 2012
Bappi has done his fair share of plagiarizing, but that doesn't mean
everything he does is plagiarized. In fact, some of his original tracks are
today often sampled by hip-hop artists around the world (for example, "Come
Closer"). However, "Yaad Aa Raha Hai" is easily one of the best tracks
Bappi has ever produced. I've listened to countless disco tracks, and
nothing else comes close, besides maybe the 1982 proto-acid house album
"Ten Ragas to a Disco Beat", partly influenced by this song.


Razor Edge on Wednesday, July 25, 2012
Ironically, many Indians don't know about Biddu's disco records of the 70s.
While Biddu did later become a popular Indi-pop producer in the 80s-90s,
his 70s Western disco songs like "Kung Fu Fighting" were barely known in
India. Not only did Biddu help pioneer disco in the early 70s, but he was
also responsible for introducing it to India in the late 70s... yet it's
Bappi Lahiri who often gets hailed as India's "disco king", when in reality
it's Biddu who deserves that honour.