Video of this song from youtube
Average Rating : 4.32
Total Vote(s) : 47
Please rate this song between 1 star and 5 stars (5 stars being the best). Just move your mouse on the stars above and click as per your rating. Your rating will really help us to improve our website. 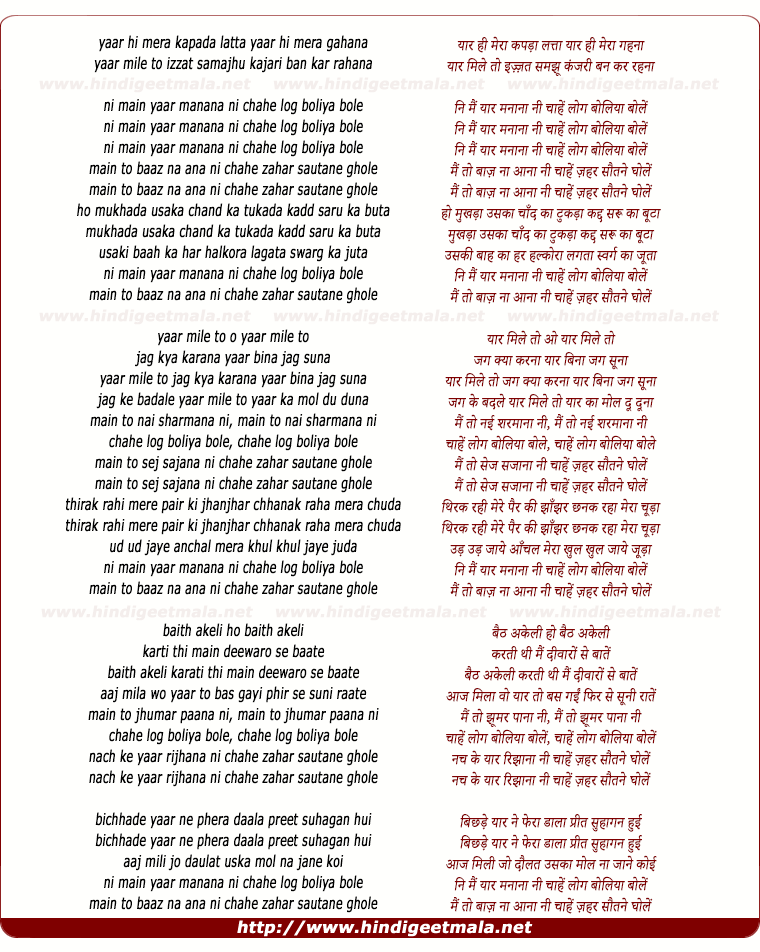 Comments on song "Yaar Hi Meraa Kapadaa Lattaa, Ni Main Yaar Manaanaa Ni"
Bajaury on Monday, December 24, 2012
I think Lata's voice was great when she was 17 and upto 35. Somewhere in
the mid sixties her voice lost that luster and became a split drum. That is
when she should have quit. However, in melody and sensuality she was third,
after Noor Jehan and Suriayya. Noor jehan lost her magic about the same age
as Lata. Suriayya did not. I love Lata's songs of that era but I can not
listen to her screaming of later years. These new songs grate on my ears.
Sorry to be honest because i like Lata.

dlsb13 on Monday, August 16, 2010
2 Bengali beauties, Raakhee & Sharmila Tagore in one frame...wow !!!! Love
this movie and the songs...Rajesh Khanna , our first
Superstar..movies & songs are not done like this anymore.

Paramjeet Singh on Wednesday, September 08, 2010
@desicad1 His face glows lke the moon, and he is tall like a saru's tree ..
Every movement of his arm is like a swing from heavens, !!! Ni .. is just a
way of addressing a girl in Punjabi !

Cinephile1808 on Saturday, March 27, 2010
I had heard several remixes of this song before hearing the original - and I have to say, this version is way more AWESOME than any of the remixes.