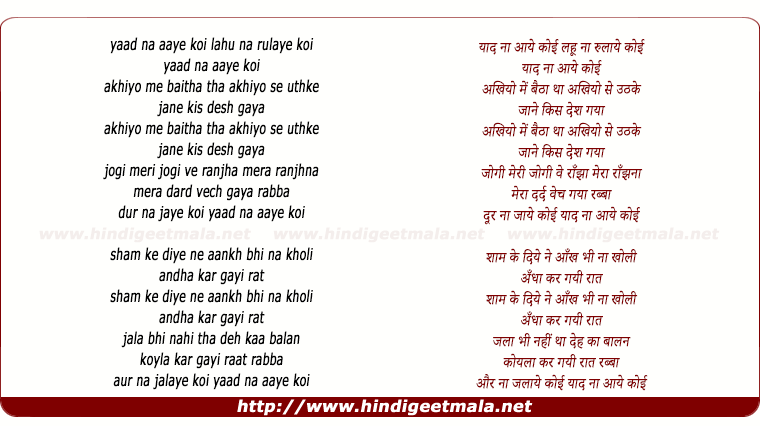 Comments on song "Yad Na Aaye Koi"
pmathew1216 on Wednesday, February 17, 2010
HaHaHa! Reminds me of the recent tiff between Bollywood actor Aamir Khan
and the great lyricist Javed Akhtar: " When Aamir again insisted that its
the star who makes a bigger contribution to a song becoming a hit, Javed
retorted, Your so-called contribution is nothing but interference. We
lyricists would be eternally grateful if you keep your so-called
contribution to yourself. We manage to do good work not because of, but in
spite of your contribution. TABU IS GOOD BUT SHE'S NOT LATA!

pmathew1216 on Sunday, June 21, 2009
To MariamMustafa, HaHaHaHa! How ever would Tabu make this song unbeatable?
It was SUNG by Lata Mangeshkar. It is the divine Lata Mangeshkar who is
UNBEATABLE and who will always be ETERNAL!

MariamMustafa on Monday, June 22, 2009
It was the expression of hers (Tabu). No offense but I too am a great fan of Lata. that was understood that she (Lata) made the song live but its an overall presentation right?
sheesabidi on Saturday, March 19, 2011
@MariamMustafa No u r retard..It would have been Tabu, Kajol, SriDevi,
Nandita Das or any old actress but Lata ji's singing could not have been
replaced by anyone..

DBhavnani on Wednesday, September 30, 2009
World may never see a singer as melodious as Lata ever again. Her voice is so sweet and soothing. I think her voice is truly a gift for God.
View all 21 comments related to song Yad Na Aaye Koi
Popular Links on HindiGeetMala