Average Rating : 4.54
Total Vote(s) : 92
Please rate this song between 1 star and 5 stars (5 stars being the best). Just move your mouse on the stars above and click as per your rating. Your rating will really help us to improve our website. 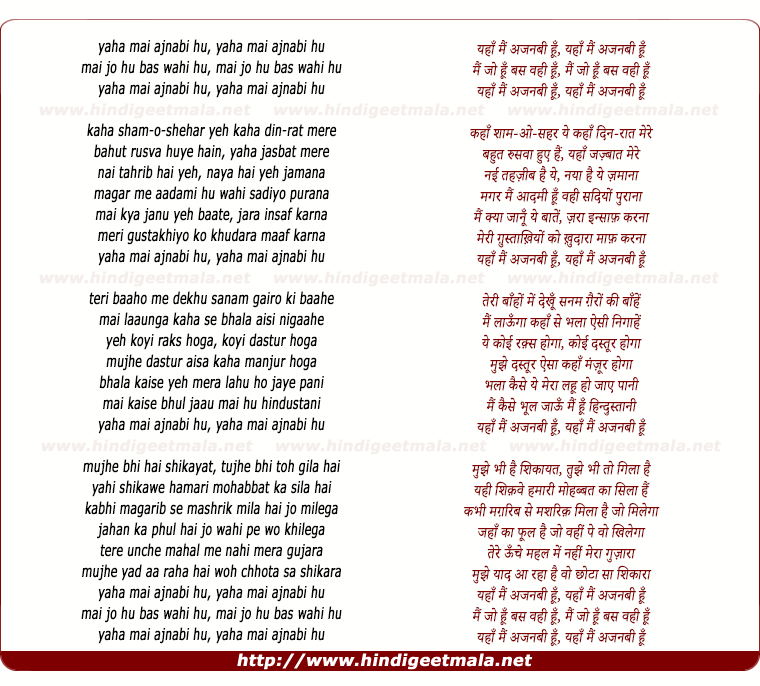 Comments on song "Yaha Mai ,Ajanabee Hu"
Salah Traa on Tuesday, December 01, 2015
Subhan Allah, no impurity in the voice, a perfect diction, he starts like a
light breeze who slowly carries you to the firmament reaching a magic
sensuouesness (nasha in hindi and nashwa in arabic) who lives in you
forever. You have just to close your eyes and let the rest to Md Rafi Sahab
(Rahmat Allahou 3lleyhi). In memory of my father (Rahimahou Allah) who was
an eternal Ajnabi in France and learned me to listen to Md Rafi Ji by
taking me every week end to the movie theatre. Main Kaise Bhuul Jaauun Main
Huun algerian ! Ajnabi nahin, no more, kabhi nahin.﻿

TIRYAKOUN on Tuesday, July 20, 2010
@stenderify His charisma, great aura, perfect and innocent acting made him
on the same rank with great american and engish actors. he plays also a
third international movie in Mumbay. When you look S.K performing you feel
that's this guy has a long experience even when he was young. He gives back
to the picture it's emotion and magic moment. The difference between S.K
and the ohter indian actors (so naives and borishes) is clear. He has
refused to take a lead of some international movies.

TIRYAKOUN on Tuesday, July 20, 2010
@stenderify S.K hindi movies success in Europe are Jab Jab Phool khile, Aag
lag jaa and so on. He his the most appreciated hindi actor. We know the
others but few of them are interesting as S.K even his two brothers.
Another one approaches S.K performances but whithout international
appearence is Rajendra Kumar (too sad) but an amazing romantic boy. The
hindi couple of the last century for us is SK and Sharmila T. So specific
Hindi couple ! Ye samah, Bekhudi are my favorite songs.

TIRYAKOUN on Tuesday, July 20, 2010
@stenderify Hello, Shashi Kapoor is more than an indian actor. He was an
ambassador of Bollywood industry through his travels in Europe and North of
Africa. His great performance in James Ivory (an english director) movie
(Heat and Dust) (Chaleurs et poussières) in French 1983 with Julie Christie
made him for ever as giant of international stardom. He has performed an
.another movie in 60's with the same director (i have forgotten the title).
Anyway, to be conitnued