Average Rating : 4.63
Total Vote(s) : 30
Please rate this song between 1 star and 5 stars (5 stars being the best). Just move your mouse on the stars above and click as per your rating. Your rating will really help us to improve our website. 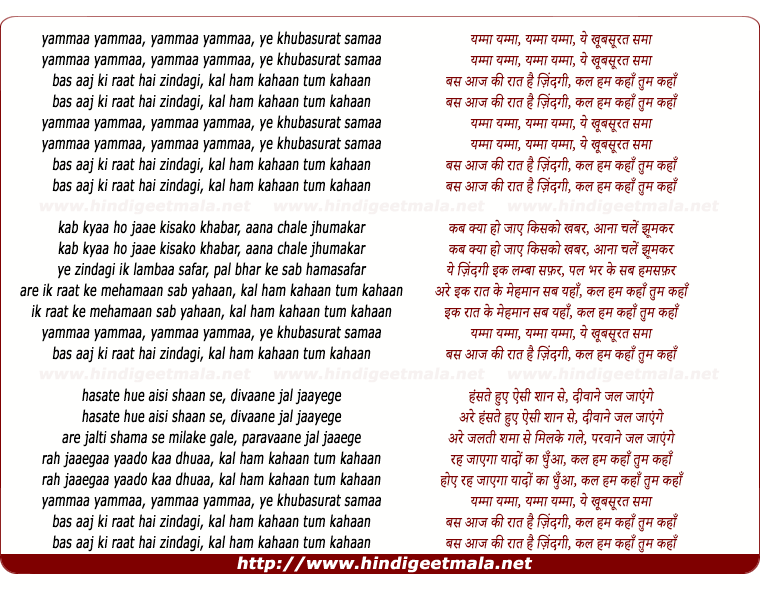 Goldensixties1 on Saturday, January 15, 2011
Ever wondered why RD Burman chose Rafi to sing this song along with him ? RD was a fantastic musician but for some reason he never liked Rafi, although he respected his immense talent. RD knew very well that Rafi was the greatest singer of all times and harboured a secret desire to sing with him. This song was probably the fulfillment of his wish.
tweetie9381 on Wednesday, February 18, 2009
Kal kya hoga yeh kisko khabar, aa naach len jhoom kar. Yeh zindagi ik lamba safar, pal bhar ke sab humsafar. Ik raat ke mehman sab yahan, kal hum kaham tum kahan. This is such an underrated song because people just look at the title. Lyrics are so beautiful and true. Great combo of Rafi ji and RD saaheb.
peacebird2peacebird on Saturday, October 10, 2009
This film KK was singing for Big B and Mohd Rafi S Kapoor but in this song RD replace KK and it was M Rafi last song by M rafi,Rd said that M Rafi sang the way in which I should be able to sing that was greatness of Mohd rafi
pmathew1216 on Wednesday, July 02, 2008
That is not Amitabh singing. I think the voice here is that of the composer R.D. Burman. Compare the voice to the "Mehbooba" song sung by R.D. Burman in Sholay. The voice here sounds similar to that.
View all 67 comments related to song Yammaa Yammaa Ye Kubasurat Samaan
Popular Links on HindiGeetMala