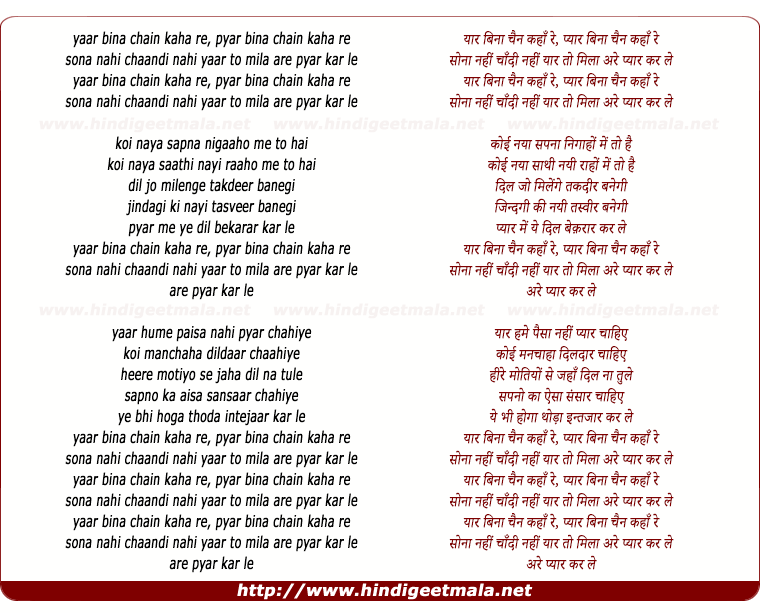 Comments on song "Yaar Bina Chain Kaha Re"
Aishwarya Kumar on Thursday, November 20, 2014
I have mixed feelings on this one. I love Barun and i can see he's done his
best here..but this is just not him. Shenaz is all smiles and dances well,
she's good.
Which means the real problem is the conceptualization and the whole idea.
I cant think of one reason why this song would fit in the movie or why it
was required. What were they thinking?
Barun and Shenaz did what they could & do look sorta cute...but even they
cant salvage the song.
Kudos to Barun coz he knows dancing isnt his strength and so he more than
makes up for it with his incredible expressions! I love the section where
he starts lip syncing to Aliya, suddenly gets up and starts dancing. Its
always a pleasure to watch this guy perform.
I just wish the makers had deliberated a little before finalizing this
song.
﻿

suzane suzan on Saturday, September 05, 2015
Bollywood comedy "Me and Mr. right" has surpassed all my expectations. I
advise you to see this movie for all those who want a good laugh and who is
certainly a fan of Indian cinema. Despite the fact that in this film, a lot
of songs and dances, they do not spoil it, but on the contrary make the
picture more intense.

After the series "What do you call this love?" Barun Sobti has become my
favorite Indian actor. In the film "Me and Mr. Right" Barun played (in my
opinion) superb. He passed all the emotions of his character, for which
separate him thanks.

The very idea of ​​the film original. The main character Alia beautiful,
young and successful woman who is looking for his "prince on a white
horse." But is it easy to find? This question is to be answered our heroine
..

Throughout the film, the viewer shows how relations between Alia and Sukha.
They survive a lot of good and bad moments in his life. But the big
question still remains:

What is still more important than the ideal of social acceptance or its own
ideal?.Barun truly inimitable! he is decoration this movie.﻿

shifin smiley on Thursday, November 20, 2014
I never watched the original version after watching this i watched that
Barun actually pulled it off well..
Good job barun sobti..being a non dancer...
u look so cute in it﻿