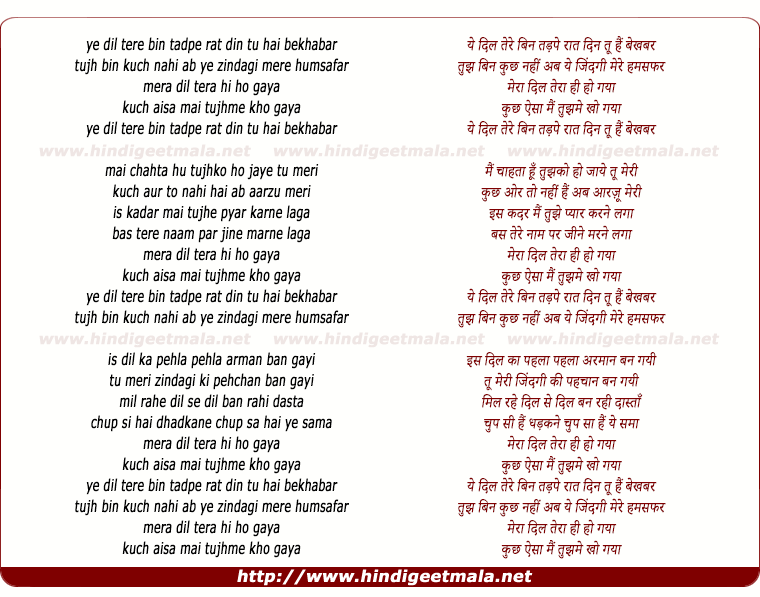 Comments on song "Ye Dil Tere Bin Tadpe Raat Din"
honestngood on Tuesday, June 15, 2010
@rohtash08 - of course Sonu is great, he is our Mohammed Rafi and Kishore
put together! Sonu has sung in many languages. Atif is a urdu-only singer.
Sorry, but Atif is a good piece of fluke promoted by vested interests.

Mahesh Parab on Friday, April 02, 2010
Yes, it went out from my memories, Its really nice song. u know whenever we
attach memories to any songs it touches inner mind and we like forever.
Nice work dude. keep posting such good songs.

avikbanerjee007 on Saturday, March 27, 2010
Listen bro...if u really want to appreciate the song...then post it with its real origin..no doubt its a good song...but why fake it with the help of some upcoming movie.u r only saying that we prefer to hear songs of Hrithik, Shahrukh.. but tell me to make this song popular u took help of Hrithik only.if its a good song all we appreciate...dont make a false identity of a good song...Sonu Nigam is still a brand in market.so he easily can sell songs by his name
diafana07 on Sunday, September 25, 2011
And what does this song has to do with the movie Kites? By the way, the
worse for Hrithik in his movie career! Kites was nothing but a piece of
CRAP! They paired him up with a NOBODY in the Hispanic movie scene. Barbara
Mori is way BELOW AVERAGE as a actress! Her soap operas always showed her
as the WORSE & NOT talented AT ALL. On the other hand, I still LOVE HRITHIK
: yesterday, today and FOREVER! Hrithik RULES and it is FOREVER, for he is
-TALENT from A - Z!


sajid shaikh on Saturday, May 01, 2010
Very good move ,but i think Hrithik not stick to his dad film only he
should take different director and producer try new thing , he is good
actor also try to concrete on Acting also as well as dance and do at least
2 movies in a year KITES was suppose to release in mid 2009 so plz hrithik
please be in a pic also, like RANBIR Kapoor is try new thing in acting and
he going excellent in industry, take some tips from RANBIR kapoor