Video of this song from youtube
Average Rating : 4.21
Total Vote(s) : 42
Please rate this song between 1 star and 5 stars (5 stars being the best). Just move your mouse on the stars above and click as per your rating. Your rating will really help us to improve our website. 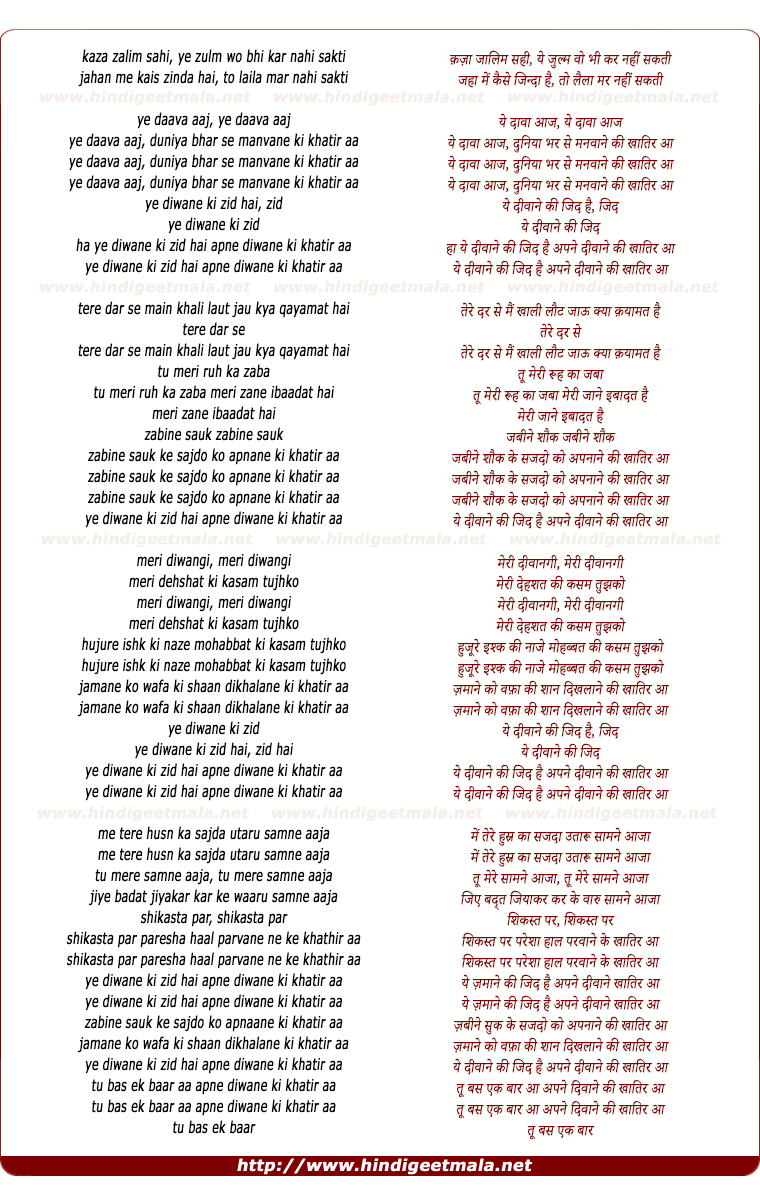 Comments on song "Ye Diwane Ki Zid Hai, Apne Diwane Ki Khatir"
rravinayak on Tuesday, February 28, 2012
y tis 3 dislikes for such a beautiful song, may b deaf i think, wat a song i bet no can sing tis sonf as rafi sahab rendeered. ter no wer place for breath, still maintainng tat ZID .every word coming like bullet. u can feel witout seeing da video. (and see wen he says "tu ek baar aaja" hw humble).rishi kp is really lucky to get tis moovy n rafi sahabs vocal. i was knowing only 2 songs is reshmi pazeb and husn hazir hai, But after listning other rafi songs i just OMG OMG OMG , hw he can sing
humtum788hai on Sunday, July 24, 2011
Musician Sound Qawwali Group: ) 07908 835 187
Professional Qawwali Group and Musicians Available!
Available For All Musical Events
Wedding, Festivals, Or Other Music Parties.
TV Radio (Artist)
They sing a variety of styles of Qawwali and are famous for incorporating many different languages into their songs, such as Hindi, Punjabi, Urdu and Farsi (Persian)*

humanfealty on Sunday, November 15, 2009
Life is more than a physical face and biological organism. It is the religious consciousness in which matter of human soul is in the prison camp of human body. It is a wisdom that can only be obtained from the nature of God (Rab). It is a stage of awareness where purity of living in the physical senses without bias.
Ajmal Mehdi

shashankdiv on Thursday, May 27, 2010
This is a rare gem by the great Rafi and Madan Mohan. This song is not heard on the radio, nor is the CD available anywhere. Great composition and rendition. And my God, what lyrics!
TheDeepakp on Wednesday, April 08, 2015