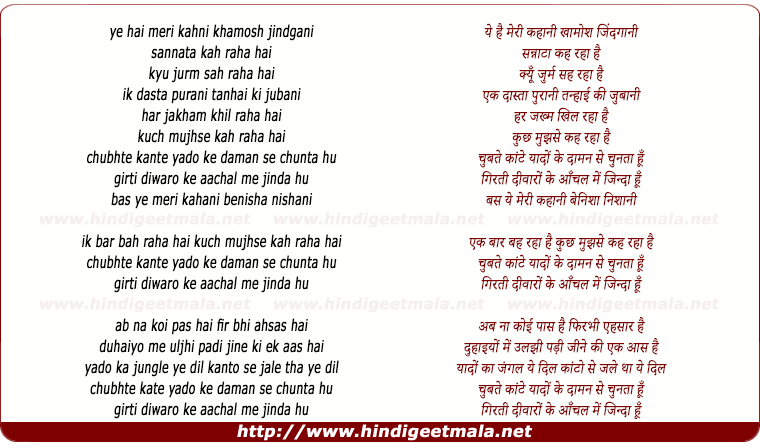 Comments on song "Ye Hai Meri Kahani Khamosh Jindgani"
TheBookloverforever on Saturday, February 02, 2013
everyone who has been hearbroken will move on.. may everyone who has failed
in achieving their dreams try and succeed...everyone who has fallen should
rise again.. all those looking for a meaning of existence shall find it..
keep walking - keep exploring - keep believing... (that's not me.. that's
absolut talking)..

Bharat Raghavan on Friday, December 19, 2014
this is the most scintillating sad melody that ever graced our part of the
world..simply a work of art...thanks strings ﻿

faraz m on Wednesday, April 30, 2014
This is as real as it gets lyricly , many agree with that, the past was so
harsh...+ notice the great talent on both sides of the border in
music...just imagine the posibilities of working together rather then
against each other...Great Music...﻿

missiii2 on Monday, September 08, 2014
Im not even a Sanjay dutt fan but im saying this. When im down i listen to
this song. Such an honest song.Sad at the same time so inspiring. Sanjay
dutt has the X factor no matter what. He doesnt try hard, he just has that
!!!﻿