Video of this song from youtube
Average Rating : 4.47
Total Vote(s) : 203
Please rate this song between 1 star and 5 stars (5 stars being the best). Just move your mouse on the stars above and click as per your rating. Your rating will really help us to improve our website. 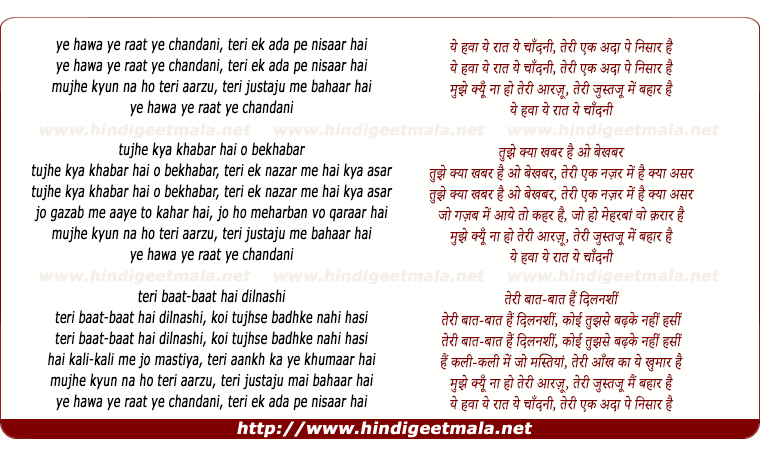 Comments on song "Ye Hawa Ye Raat Ye Chandni"
Voltairec on Friday, May 21, 2010
@araniees-The song itself is stunning not only for Talat's lilt but for the
most romantic nay delicately sensuous picturization. Shammi lierally seems
to be floating in Dilip's charm.personally i like Aakhri Dau though for
Nutan's expression of awkward love, pity, respect, confusion and
helplessness.I watched it a million times and would watch a billion more
times;-)

Ashok Tekchandani on Friday, October 16, 2015
this is talats best song i have so heard it is heavenlly soul touching
voice. i think it was sajid bhais music creation. kash main bhi kabhi gayun
actully these voices are godly created whe they travel from dil se vocal
chords gives such melodies this is availble only in our india﻿

Subhash Kothari on Friday, April 18, 2014
This one is very sweet one from Sajjad hussain. This reminds me the other
one with similar tune from Mohd. Rafi from Akhari Dao and Madan Mohanji's
music. I recollect that there was some uproar for thse two sonfgs and
music. I like both the songs.﻿