Video of this song from youtube
Average Rating : 4.41
Total Vote(s) : 824
Please rate this song between 1 star and 5 stars (5 stars being the best). Just move your mouse on the stars above and click as per your rating. Your rating will really help us to improve our website. 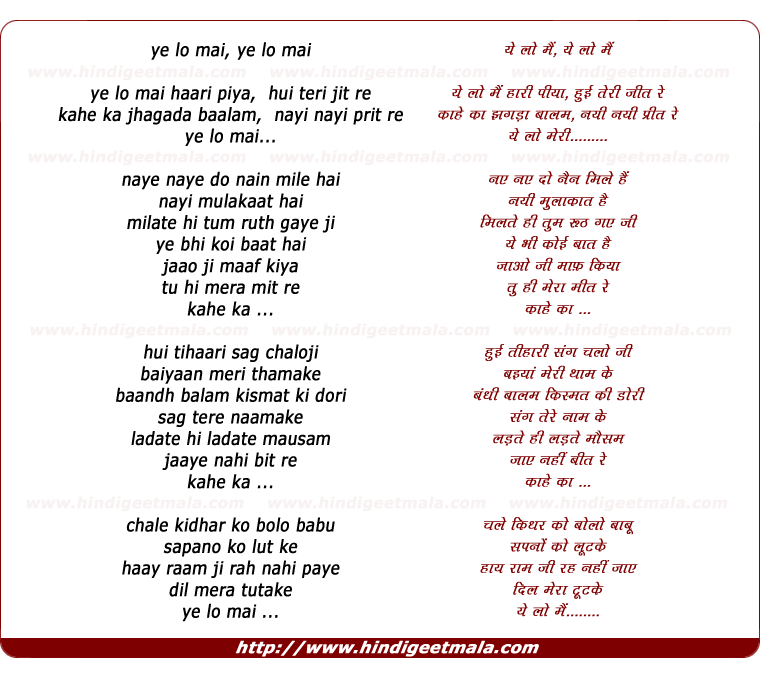 Comments on song "Ye Lo Main Haari Piyaa, Hui Teri Jit Re"
orientlover1 on Thursday, December 30, 2010
Shyama (real name Khurshid Akhtar ) came from a poor family of Lahore. During early days of her career in Bombay film industry a producer went to her house to offer a role in a film. She gave him a chair to sit but herself kept standing for two hours. There was no other chair in the house!!!!!!
Parag Sankla on Monday, August 31, 2009
The line "Dekho main gaali doongi, chhod do yeh reet re" in the last stanza
was deleted from the records. It can only be heard in the film soundtrack.
Most likely due to censor problems. This is one of the sweetest solo songs
of Geeta ji, thanks for sharing.

shilpa88888 on Tuesday, October 08, 2013
I heard this song for the first time on 'Raina Beeti Jaye'. In this show
they play Hindi classical songs. My father usually watches this show.
Anyways, I really like this song. There is something very innocent and yet
charming about this song.

Coucoutchicou on Saturday, May 16, 2015
What a pity OPN gave up this style of music together with his collaboration
with Geeta Dutt and Shamshad Begum in the late fifties... No one ever
equalled the quality of this music either then or after that period...﻿

Partha Sur on Friday, August 27, 2010
Shyama was very beautiful and photogenic and was a good actress but alas
she could not compete with the likes of Madhubala, Nargis, Meena Kumari and
Nutan - the leading ladies of the fifties.