Video of this song from youtube
Average Rating : 4.50
Total Vote(s) : 52
Please rate this song between 1 star and 5 stars (5 stars being the best). Just move your mouse on the stars above and click as per your rating. Your rating will really help us to improve our website. 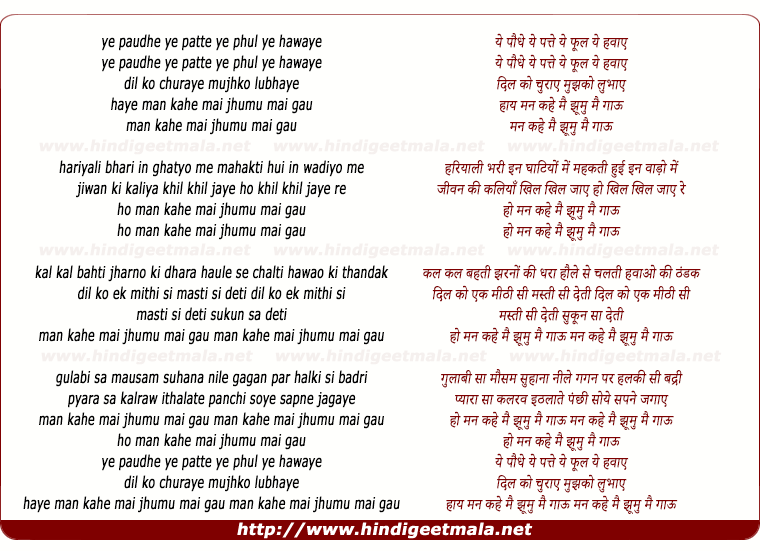 Comments on song "Ye Paudhe Ye Patte Ye Phool Ye Hawaye"
TheDesertsanddune on Sunday, March 21, 2010
just superb song
the music of raghunath seth is so pleasant and beautiful to as saccrine
the base guitar and electric guitar were marvellous combination with tabla indian musical instrument
nice jugal bandi
thanks a lot

sbhosale2101 on Saturday, October 24, 2009
Very nice film also, its on extra marital affiar
Rajesh Dhar on Tuesday, June 19, 2012
This song is afavorite and nostalgic to me .when I was 16 this song usually played in CHYAGEET,a program of Hindi film song and nice voice over,which was being broadcasted at the BIBIDH VARTI of ALL INDIA RADIO.In those days I was brought into dream world by this song and like others but unfortunately still I could not get the chance to watch this song.Thanks rajsfri.com.
824vasu on Monday, October 10, 2011
i have been searching for this song since long. Since I do not know the lyrics exactly I could not locate this. Thanks for giving such a melodious song.