Video of this song from youtube
Average Rating : 4.36
Total Vote(s) : 2483
Please rate this song between 1 star and 5 stars (5 stars being the best). Just move your mouse on the stars above and click as per your rating. Your rating will really help us to improve our website. 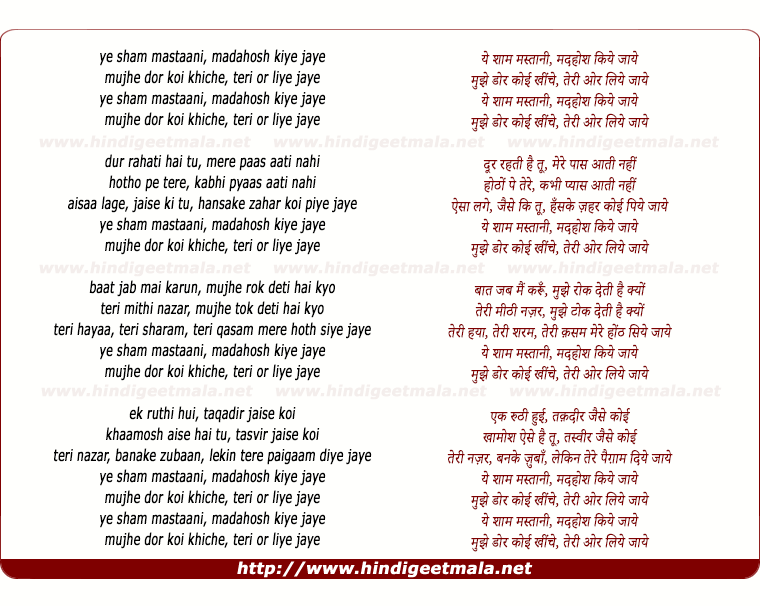 Comments on song "Ye Shaam Mastaani, Madhosh Kiye Jae"
Lahoreumar on Wednesday, September 07, 2011
The trendsetter, not of voilence like Amitabh, but of lovely, cool and
sensitising duets like this one.The romantically serene Rajesh Khanna would
live in the memory lanes of audiences as the suave, composed and versatile
actor sans voilence whose demeanor ruled early seventies like nobody before
or after.His soft personality gave that impetuous to writers, directors﻿
and music composers to craft romantic, lively, jaunty, lesson oriented and
morally strong films.No cheap dash drama and action.

Lahoreumar on Friday, January 25, 2013
Yes, you are right to some extent. But you should also realize that the
majestically cool and romantic demeanor and bewitching screen presence of
Rajesh Khanna is the over riding factor that supercharged this meaningful
song with the necessary ingredients which literally take the audience to
this verdant meadow and ethereal film setting while forgetting that the
full credit of this mesmerizing filming sequence goes to the director,
playback singer, camera unit and lyricist and extra artists.

bollyBob1980 on Wednesday, July 18, 2012
A good actor makes it seem easy, Kaka made it seem simple. He was one of
the best to ever grace a screen, Indian or non-Indian because he was in the
same class as Connery, Gregory Peck & Dilip Kumar: They all had good looks,
charm & talent, but also 'je ne sais quoi', that indefinable quality that
made them spellbinding & superlative. It is erroneously believed anyone can
perform; Kaka proved either you have it or you do not. Kudos to a legend
the like of which we will never again see. RIP

Vinod Nambiar on Monday, June 29, 2009
This music is mind blowing - but then generation changes , tastes changes
the current breed love shahrukh , aamir for their acting - if one is a
great entertainer the other is a perfectionaist for todays gen. lets not
compare two Eras ! i On Sanjay D - indicted on grounds of abetting
terrorism and Salman probably got away with un intentional murder - both
wrong in their own respect - but law doesnt favour any ... so abide by its
decision talk art not personal lives

Pepe Chareetur on Wednesday, September 29, 2010
I am a great Mohammad Rafi fan. Not that I don't like Kishore Kumar's
songs. I used to and still love his Paying Guest, Teen Deviyan, Hum Sab
Ustaad Hai, Rangoli,Mr X in Bombay, Duniya, Mahal and other numbers. From
1969 to 1980 Kishore Kumar relegated Rafi to number 2 spot. Both are great
singers. I agree with vaadaenmacchi's comments. My favourite actor will
always be Shammi Kapoor. Rajesh Khanna may occupy 2nd place. I didn't like
Kishore Kumar's acting.