Average Rating : 3.86
Total Vote(s) : 63
Please rate this song between 1 star and 5 stars (5 stars being the best). Just move your mouse on the stars above and click as per your rating. Your rating will really help us to improve our website. 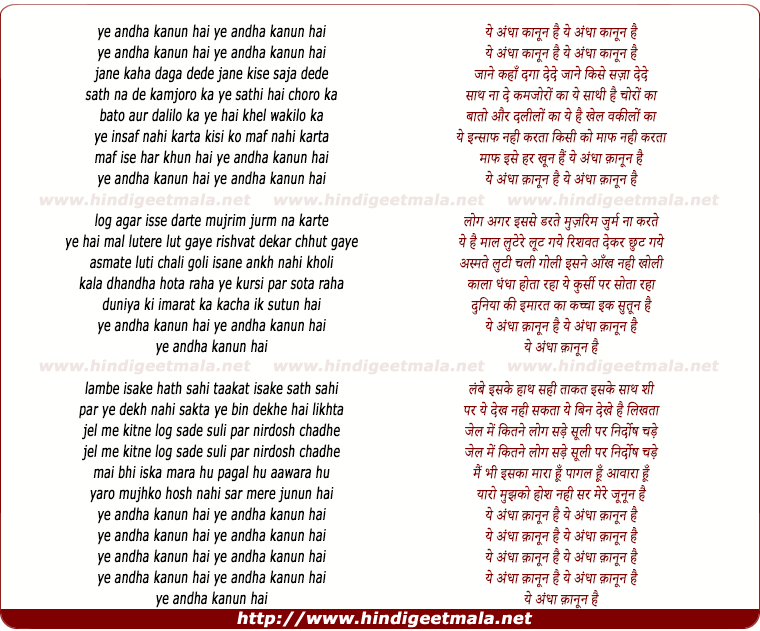 sattydelhi on Saturday, June 13, 2009
Kishore Kumar was a phenomenal singer. I doubt any singer of today, no
matter how great they are and considered would be able to sing many of his
songs such as this one with same amount of impact.

dkL1 on Saturday, September 17, 2011
There is only judgments and orders by the Courts Justice is only done by
the Great One who knows debits and credits of your all actions Jai Sri
Krishna

codingjoy on Monday, July 25, 2011
watching Caylee Anthony case, where a young white trash who likes to party and got away with the crime. you feel like that the system is broken!!!!!
fahedjk on Sunday, September 12, 2010
what we call law is not actually law that is why it is blind coz if it was law it wouldnt be law
View all 11 comments related to song Ye Andha Kanun Hai
Popular Links on HindiGeetMala