Average Rating : 4.23
Total Vote(s) : 274
Please rate this song between 1 star and 5 stars (5 stars being the best). Just move your mouse on the stars above and click as per your rating. Your rating will really help us to improve our website. 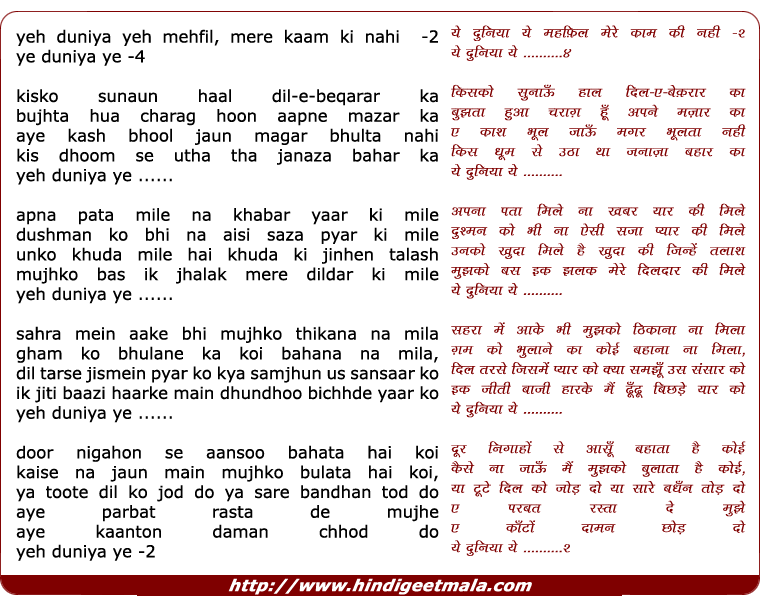 spsyed on Saturday, July 31, 2010
Rafi sahib passed away 30 years ago (31 July 1980), but his legend lives on as his voice still continues to entertain and amaze millions around the world. No one replaced humble, modest and pious Rafi sahib. He changed Indian film playback and music industry forever. He is a book on how to sing. His playback voice changed the fate of most Indian film actors, and made them superstars of their time. I am honoured to have met him, be his family's neighbour in London-UK. RIP Mohammed Rafi.
mialvi9 on Saturday, November 14, 2015
A song becomes a classic only when the emotion of the song is conveyed by
all of its ingredients - lyrics, music, rendition and acting. This is one
example where all of the ingredients are fully soaked in the theme of the
song - helplessness and hopelessness. Such a feat can only be achieved by
the masters of art like Kaifi Azmi, Madan Mohan, Mohd. Rafi and Raj Kumar.
A grand salute to each of them!﻿


Khalid Hamid on Wednesday, September 12, 2012
@ Rajiv.Thank you for your sentiments.this is
life one day we all go sooner or later.This is temporary
world...my pain is until my death.I
have no peace of mind since she passed away and Yeh duniya Yeh mehfil mere
kam ki nahin ha.

Matloub Husayn-Ali-Khan on Saturday, March 30, 2013
Great song sung by the late great by Mohammed Rafi "Yeh Duniya Yeh Mehfil
from Bollywood film (Heer Ranjha), 1970 and is probably one the all time
greatest ever Hindi filmi song ever with musical composition by Madan Mohan
and lyrics written by Kaifi Azmi.