Average Rating : 4.11
Total Vote(s) : 148
Please rate this song between 1 star and 5 stars (5 stars being the best). Just move your mouse on the stars above and click as per your rating. Your rating will really help us to improve our website. 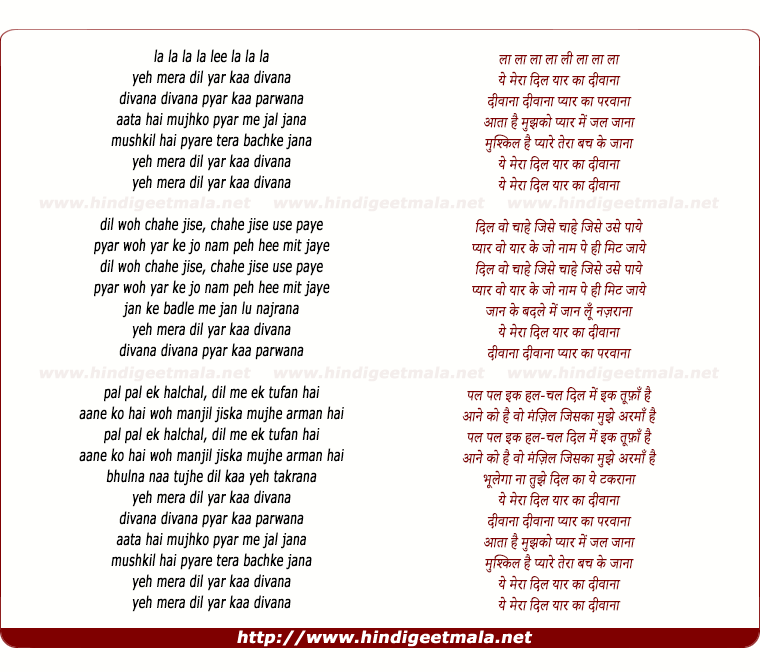 Comments on song "Yeh Mera Dil Yaar Ka Diwana"
viraquagirl on Tuesday, August 24, 2010
Old Indian actresses were so beautiful, very natural and attractive. Such as, Helen, Madubala, Saira Banu, Asha Parekh, and many more. Now Indian actresses aren't very pretty and have a bad attitude. Very few r really beautiful, such as Katrina Kaif, Aishwarya Rai but she's a fake beauty, and 2 or 3 more. I'm just 13 and I say that Indian movies were way better back then. Also, dont compare Helen to Kareena Kapoor. We all know Helen is much better and Kareena is a big fake.
babehurst88 on Wednesday, March 03, 2010
yes. she is creepy looking (the contacts are NOT working for her). Yes.
they needed to fire the choreographer. But I will have to disagree with you
when you say she is fat. Honey, this is the body of a woman. Let me talk
this through so you'll learn. Women have estrogen and a higher body-fat
ratio than men. That is what makes one a woman. Curves are a sign of
fertility. Now, as far as Helen goes, she has absolutely no unsightly
bulges.

Good Boy feeling Better. on Sunday, September 04, 2011
Mr Bachchan's movies, in the '70's had a disturbing social message. The
hero, try as he might, cannot get out of the social morass he finds himself
in. Neither the hero, nor society is to blame for this. It's just the angst
in the situation, that he finds himself in, vis a vis society. But, the
movie, Don, was a refreshing change, from this trend.

HiRoller777 on Tuesday, May 18, 2010
@TheSolitaryRex It's not just Helen and Kareena. Although the production qualities became better the new actors are all mediocre (at best). The actors from the old days had real talent and were on top of their game. The new actors lack talent. Their acting is so over the top that you think you are watching a cartoon.
Za Qa on Thursday, April 22, 2010
@babehurst88 Your equally brainwashed to think a hourglass 'is the body
many women dream of having' and one which all men 'naturally' want.Ponder
that, dude. All body shapes are beautiful.The deifniton of 'beauty' is
transient witht the times.Live with that.