Video of this song from youtube
Average Rating : 4.20
Total Vote(s) : 3734
Please rate this song between 1 star and 5 stars (5 stars being the best). Just move your mouse on the stars above and click as per your rating. Your rating will really help us to improve our website. 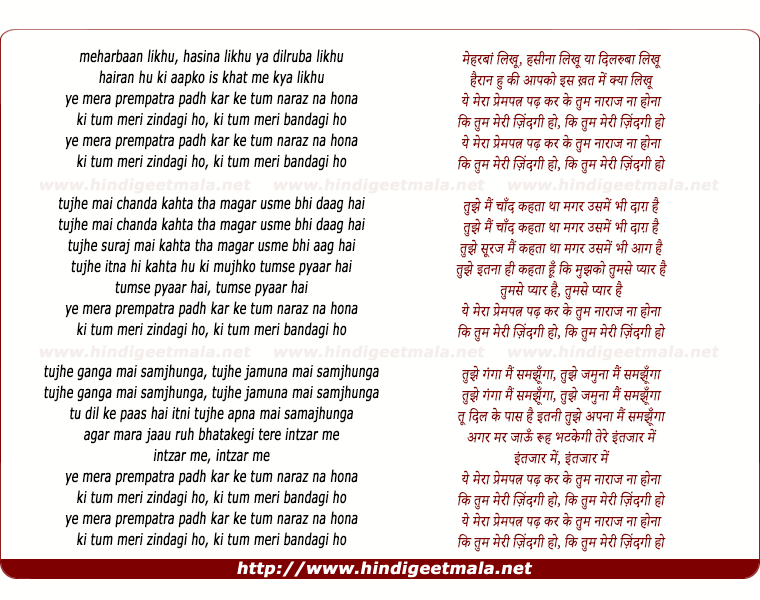 Comments on song "Yeh Mera Prem Patra Padhkar, Ke Tum Naaraz Na Hona"
aceji on Saturday, April 07, 2012
SUPERB FILM BY RAJ KAPOOR. All my favourite actors, writers, musicians in
this film. 1964 also had SJ films like APRIL FOOL,BETIBETE, RAJKUMAR and
AYEE MILAN KI BELA. In this film, Sangam they were tops with Mukesh, Lata
and Rafi. LP like all other were also superb from the 60s MDS. Laxmiji was
a fan of SJ and gave teir brand of music in PARASMANI,AAYA SAWAN JHOOMKE,
AAN MILO SAJNA AND FARZ. The cruel upset was they won DOSTI award despite
SANGAM and all because Dosti was an emotional film.

Mridula Nair on Tuesday, March 13, 2012
THIS MEMORABLE SONG WAS MADE BY THE SUPER GENIUS JAIKISHAN SINGER SUBIR SEN
HAS GONE ON RECORD TO SAY THAT JAI MADE THIS SONG IN LESS THAN 20 MINUTES
SHANKER JAIKISHAN COMPOSED MUSIC FOR 145 FILMS AND LP 500 FILMS EVEN TODAY
AFTER 60YRS MILLIONS OF PEOPLE ENJOY THE WONDERFUL HITS OF SJ IT ALSO SHOWS
THE DIFFERENCE BETWEEN THE TRUE MUSICAL GENUIS SHANKER JAIKISHAN AND
NOISEMAKERS ZERO TALENT LAXMIKANKT PYARELAL PEOPLE LIKE LP BHAPPI WILL COME
AND GO BUT S J WILL BE REMEMBERED FOREVER

guroeskrima on Tuesday, September 06, 2011
Ultimate high school Love song to imagine with your girl class-mate as you
ask her to lend you her notebook for help in "homework" and other such
excuses.Good restoration of the color of film print of this hugely classic
movie. One of my friends used to get his girlfriend's notebook and then
imagine about her and even smell the ink on the notebook. I smelled usually
the vaseline in my girlfriend's jet black hair in those days of smearing
the heair with kala kola hair oil.

Dinesh kumar on Sunday, March 24, 2013
One of the best song of Rafi and SJ..the orchestration is simply out of
this world.It is said that Jaikishen composed that song after getting
inspired by his own love story with the girl he was in love and who
eventually became his wife later. .SJ were indeed the best ever music
composers but Laxmikant Pyarelal were of the same class.they composed
some of Rafi's best songs...