Average Rating : 4.46
Total Vote(s) : 24
Please rate this song between 1 star and 5 stars (5 stars being the best). Just move your mouse on the stars above and click as per your rating. Your rating will really help us to improve our website. 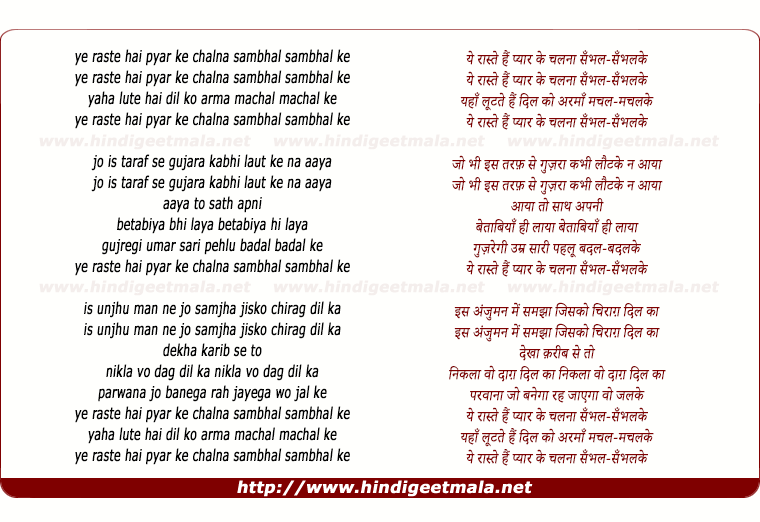 Comments on song "Yeh Raaste Hain Pyar Ke Chalna Sambhal Sambhal Ke"
RealMusicKing on Tuesday, August 24, 2010
Hello Yuan and thank you for uploading. Been looking for this song for a while. The song is taken from a western tune, "The Breeze and I" and it is a beautiful one. This was Sunil Dutt's very first production 1962. Next was Mujhe Jeene Do 1963.
Pashambay Baloch on Tuesday, September 07, 2010
Yeh raaste hain pyar ke is based on true story of Kawas IN Commander, his
wife Sylvia a british, his friend Prem Ahuja a high society play boy.
During absence of Kawas due to defence assignment, Prem seduce Sylvia. On
return of Kawas, she ignore him and confessed her affair with Prem. Kawas
murder Prem and sentence for life imporsnment. After 3 years jail he was
pardoned by Governor. Kawas family migrated to Canada and he died in 2004.
Sylvia still alive.Sunil(Kawas)Leela(Sylvia) Rehman(Prem)

yuanyuanyuanyin on Monday, July 26, 2010
- You are most welcome, my dear friend.

I don't think this particular film can be downloaded from the Net.
Even btjunkie or thepiratebay do not have this, I just checked for you.
I kindly suggest you to download what is available at You Tube, I mean songs.
If you want to know the free and easy software in order to do that, please send me a message and I will tell you ALL what you have to do.
Thank you.
By the way, I have posted 2 more songs from the same film.

yuanyuanyuanyin on Tuesday, September 07, 2010
- Thank you my friend for the information.
Actually, I did not want to write about this on the description initially, since the case is of controversial nature!..
If you go to Wikipedia and type "KM Nanavati v State of Maharashtra", you will get the full story.
Thank you.

CVTME on Monday, March 26, 2012
Oh, Good Gracious!!! I have been looking for this musical gem since I first heard it 25 years ago, in ... Ek Phool Dop Mali, in a medley scene (the mountain scene) and I knew it must be a song from another movie. Now I have found it aty last, thanks a lot for sharing!
View all 38 comments related to song Yeh Raaste Hain Pyar Ke Chalna Sambhal Sambhal Ke
Popular Links on HindiGeetMala