Video of this song from youtube
Average Rating : 4.50
Total Vote(s) : 5415
Please rate this song between 1 star and 5 stars (5 stars being the best). Just move your mouse on the stars above and click as per your rating. Your rating will really help us to improve our website. 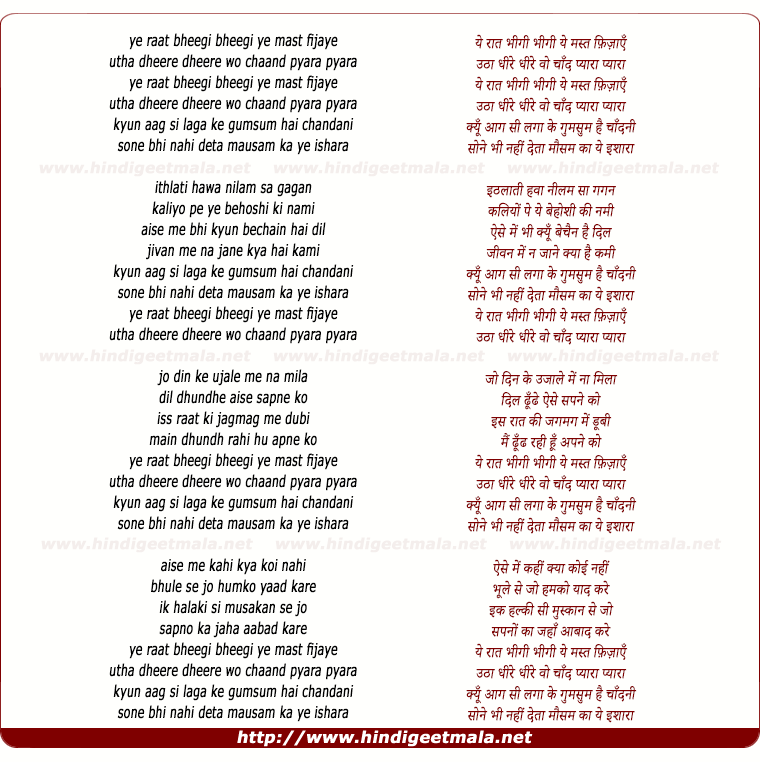 RealMusicKing on Tuesday, June 15, 2010
Hello Yuan. This is Mannada's best duet ever, with Lata. Manna Dey's voice is naturally romantic. I met him in 2002 in a concert. I swear to the Almighty God, each and every song sounded just as it did back in 50's, 60's, and 70's recordings. Of course, without the full orchestra but his voice was still golden.
I even had him autography his 1968 released LP record. He was so happy to see was someone asking for his autography without presenting a CD to him. :-)

Partha Sur on Friday, May 21, 2010
Yes Manna Dey was definitely better than Kishore Kumar. But all the Bengali
singers had the same problem pronouncing Hindi words with a "chandrabindu"
(e.g. "chandni" in this song). You see in Hindi the two letters (with a
chandrabindu above it (e.g. the letters n followed by d in "chandni" are
joined (together) but still distinct - but in Bengali the n and d are not
distinct but form a compound sound (the n almost disappears the next
previous letter gets nasalized).