Average Rating : 3.43
Total Vote(s) : 286
Please rate this song between 1 star and 5 stars (5 stars being the best). Just move your mouse on the stars above and click as per your rating. Your rating will really help us to improve our website. 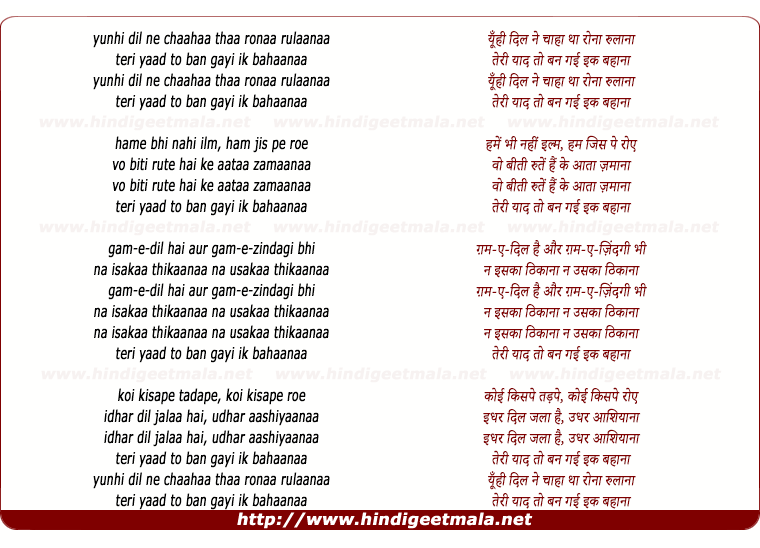 tyagnesh on Wednesday, April 20, 2011
In the movie, "Dil Hi To Hai", editor should not have cut this song. The story line is well known and if you cut some scenes, it will not make any difference. Songs were the the most beautiful part of the movies of 1950s and 1960s. People came to see the movies for mostly music.ï»¿ If it is possible, they should reedit the movie now and add the songs. Suman Kalyanpur's voice was very beautiful and in this song she matches Nutan's voice as good as Lata. Thank you for this rare song online.

KhalidAsgharRadioPak on Wednesday, November 04, 2009
What a superb technically thought orchestration. The start with mandolins,
viollins and then the entry of rhythm (Dholak & tabla). The moments rhythm
starts, it unforlds the magic of the song in total. then i agree to the
opinion of chamogaa (Vipin bhai), the voice of Suman Kalyanpur is innocent
and she rendered with involvement. Thanks to *suhanee2*, a YouTube channel
for up loading this very novel songs. Khalid Asghar.

V. Siddhartha on Friday, October 30, 2009
In moments when professional rivalry was perhaps out of her mind, did
Lataji think that SK was worthy of her admiration? On the basis of this
song and those in Mohabbat Isko Kehte Hain, I would like to think that
Lataji rose to that level of professionalism. What a sweet,sweet voice SK
had! A splendid song and a charming visual presentation of traditional
Indian women along with images of SK herself. Thanks, Suhanee.

rumahale on Tuesday, September 18, 2012
It is beautiful and highly adorable - glad that the learned viewers have
all appreciated. I have liking for Suman Kalyanpur songs; there is no
secret about it. Sad to note that it was not included in the movie. Thank
you for nice presentation.