Video of this song from youtube
Average Rating : 4.42
Total Vote(s) : 90
Please rate this song between 1 star and 5 stars (5 stars being the best). Just move your mouse on the stars above and click as per your rating. Your rating will really help us to improve our website. 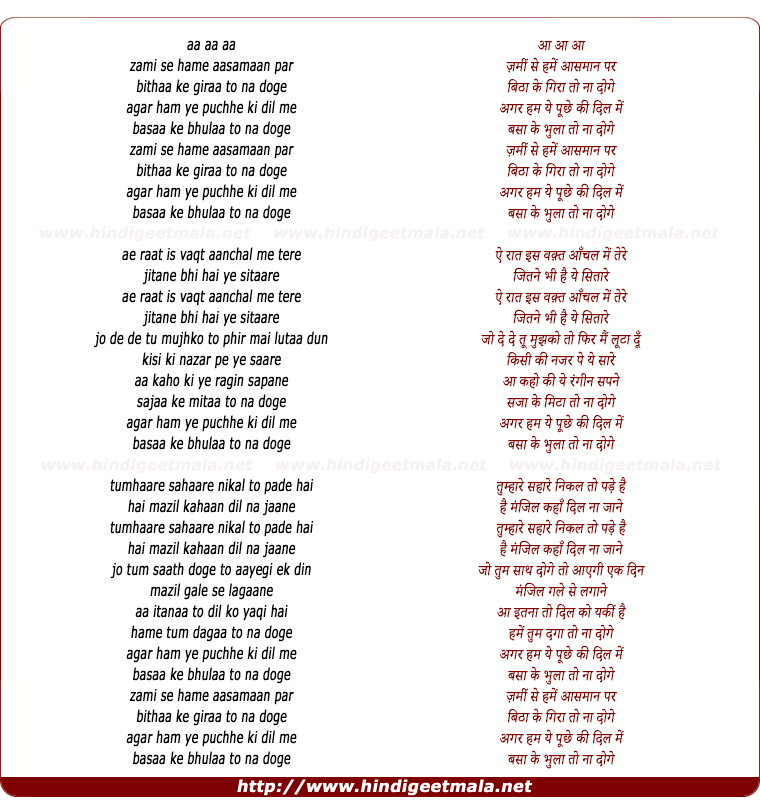 Comments on song "Zamin Se Hamen Aasamaan Par Bithaa Ke Giraa To Na Doge"
nandu1f on Saturday, June 13, 2015
Soft romance and soft tones for softened hearts. Is there anything more
appropriate for a cool evening by a shimmering lake?﻿

bhugop on Sunday, December 22, 2013
This is one of many gems that came out of Madan Mohan. One thing that is
very special about most of his songs are the inherent rhetorical questions
within the lyrics. Like in the one here ...bita ke ghira tho na doghe?
...agar hum ... basa ke bhoola tho na dhoghe? This is a hall mark of Madan
saab's inimitable compositions. Kudos to him and many thanks to the person
who uploaded this song!﻿

tanmoy kumar mukherjee on Thursday, August 01, 2013
I have observed that nobody sings this song in live programme.Such
melodious song will hardly be composed these days