Average Rating : 4.76
Total Vote(s) : 25
Please rate this song between 1 star and 5 stars (5 stars being the best). Just move your mouse on the stars above and click as per your rating. Your rating will really help us to improve our website. 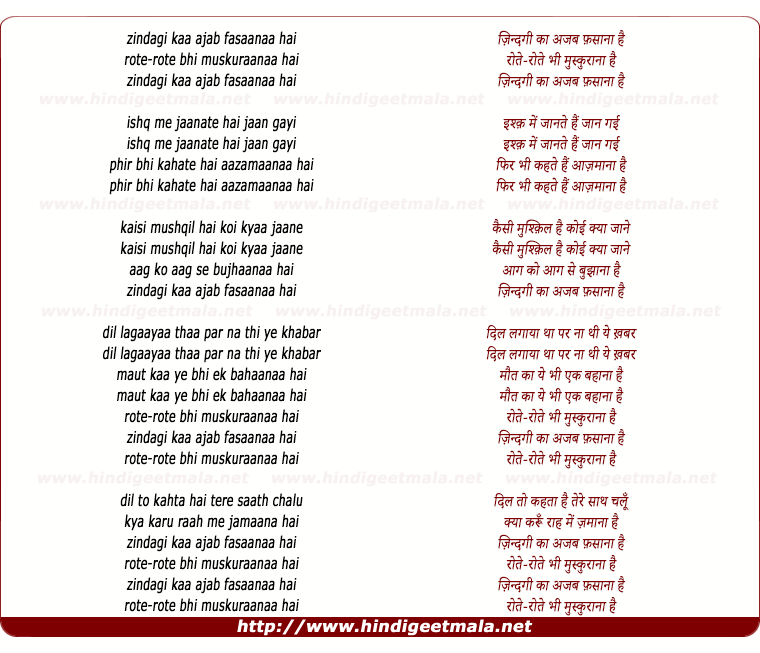 Comments on song "Zindagi Kaa Ajab Fasaanaa Hai"
nickkohri on Sunday, August 23, 2009
This was the swan-song of Anil Biswas. This movie was his last movie score. The other gem "Kuchh aur zamana kehta hai kuchh aur hai zidd mere dil ki" by Meena Kapoor (Mrs Anil Biswas) is also in this. If you have it please upload it. Thanks.
V. Siddhartha on Thursday, August 06, 2009
Never heard this beautiful, philosophical yet soothing ghazal with sweet
instrumental support. Separately or together, Lata and Mukesh always come
to us with angelic voices. Thanks for the splendid upload, ajayuv.

Param Kaur on Friday, October 07, 2011
a rare beautiful song, very rarely heard on the radio
himani bedi on Monday, December 28, 2009
The most soothing song and yes philosophical too. Two other songs which
lifts me up in low times is 'gham ki angheri raat mein' and 'wo subah kabhi
to aayegi'...as they say 'less is more' this song justifies it.