Video of this song from youtube
Average Rating : 4.70
Total Vote(s) : 30
Please rate this song between 1 star and 5 stars (5 stars being the best). Just move your mouse on the stars above and click as per your rating. Your rating will really help us to improve our website. 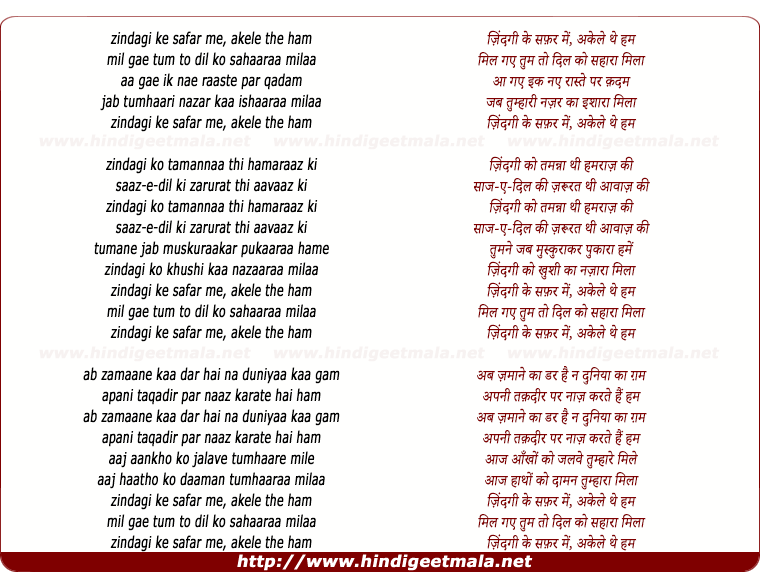 Comments on song "Zindagi Ke Safar Men Akele The Ham"
Shanti Mishra on Sunday, September 22, 2013
Many thanks for uploading this Golden eras' amazing melodious romantic song
which will not come again in this Era.I heartily appreciate for your
uploading taste.Whenever I heard this song,for a little moment, we go to
our childhood memories.

Ali Shaam on Thursday, June 11, 2015
Don't give up someone you can't go a day without thinking about . . . it's
a beautiful and heart touching song indeed this song reminds me those days
once again. Thank you for uploading such a nice song.﻿

Jalilm123 on Saturday, August 25, 2007
thanks for uploading but arif yaar, its little (not too) late as Mir has
already uploaded better version of this song, still its very good effort.
Can you please upload Madam Noor Jehan version please?

Mani Menon on Saturday, October 06, 2012
Wah! Lajawab! The song and Rafi! Sunil Dutt and Nandaa were superb in this
movie.