Video of this song from youtube
Average Rating : 4.47
Total Vote(s) : 259
Please rate this song between 1 star and 5 stars (5 stars being the best). Just move your mouse on the stars above and click as per your rating. Your rating will really help us to improve our website. 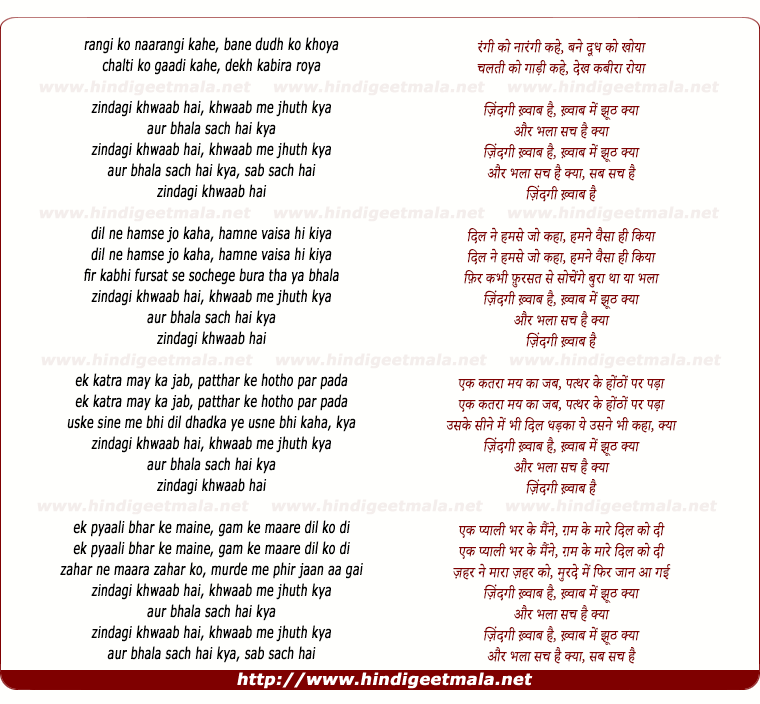 Comments on song "Zindagi Khawab Hai, Khvaab Me Jhuth Kya Aur Bhala Sach Hai Kya"
rumahale on Friday, September 21, 2012
His name is Shailendra. Some web sites have wrongly indicated as Shailendra
Singh. When I sent message about it to smriti(.)com, there was no response.

Sumanta Nag on Wednesday, November 06, 2013
By the way , for your more information, Maestro Ron Goodween's(not Ron
Godwin) 'Come Back to Me' was track originally from his album "Music For An
Arabian Night", which was released in 1959, three years later than Raj
Kapoor produced , Amit Mitra & Legendary Bengali Thespian Sombhu Mitra
directed 'Jagte Raho' (1956), so where does the question of even copying
arise ?

Jagdish Dhantole on Sunday, February 10, 2013
Many many Thanks,Mr. Dipankumar Sinha Sarkar for uploading Bengali version
of Zindagi khab Hai song, it is very Good, I feel comparision is not our
subject, nor we should go on wrong path, Salilda was great and will remain
Great for long long time, what that lyric says " Zindagi khwab hai khwab
mesach hai kya?.. sab sach hai " Thanks once again regards,

Sumanta Nag on Wednesday, November 06, 2013
Quite Different from Ron Goodwin's original track, I am surprised quite a
lot from your judgement, as how quickly and uncannily you have came to
conclusion about Salil Da, the maestro, as master of copying !! By The Way,
the 'COME BACK TO ME' was inspired by mid-eastern folk songs, if you
google, hopefully you should correct your stand.

pforpappu on Thursday, January 27, 2011
Thanks so much for this song. I haven't heard since - can't remember when
but I do remember my late father having the vinyl record of this and him
playing this song countless times. Listening to this and watching it has
really flooded me with some good childhood memories.