Video of this song from youtube
Average Rating : 4.40
Total Vote(s) : 1975
Please rate this song between 1 star and 5 stars (5 stars being the best). Just move your mouse on the stars above and click as per your rating. Your rating will really help us to improve our website. 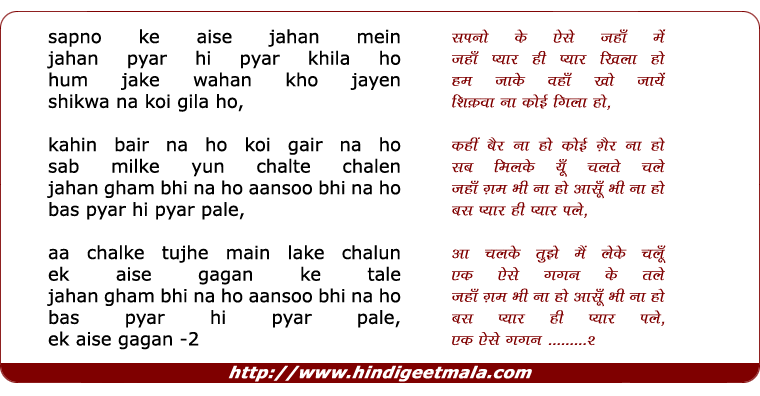 Comments on song "Aa Chal Ke Tujhe Main Leke Chalu Ek Aise"
hitleo on Tuesday, January 11, 2011
Wonderful Song, Excellent Music, Fabulous Lyrics, Versatile Direction & above all --> The Legendary Kishore Kumar with this magical voice... What else is needed. Just Enchanting. Try to listen this song sitting late night with your eyes closed on an arm chair in hot summer time and you will feel the breeze out from this song.
crazyoldsongs on Monday, September 06, 2010
one of the most beautiful , popular and evergreen song by kishore kumar .
thanks mahale ji for sharing and thanks rahuljalan1973 for the full version
of this gem . the other uploaders like rajan8550 and blacktiger310886 have
fixed only the first scene on the whole song .

acesid on Sunday, July 18, 2010
kishore da..unadulterated ..everything you see,hear,feel in this song is KK's creation..lyrics,music ,direction..down to the little kid (his son amit) RIP kishore da
Nayan Yagnik on Tuesday, August 30, 2011
As far as I know, the song was written by Kishore himself & he refused to
give his writing to Sheilendra for correction! Nice to see young Amitkumar
with his dad!!