Video of this song from youtube
Average Rating : 4.72
Total Vote(s) : 36
Please rate this song between 1 star and 5 stars (5 stars being the best). Just move your mouse on the stars above and click as per your rating. Your rating will really help us to improve our website. 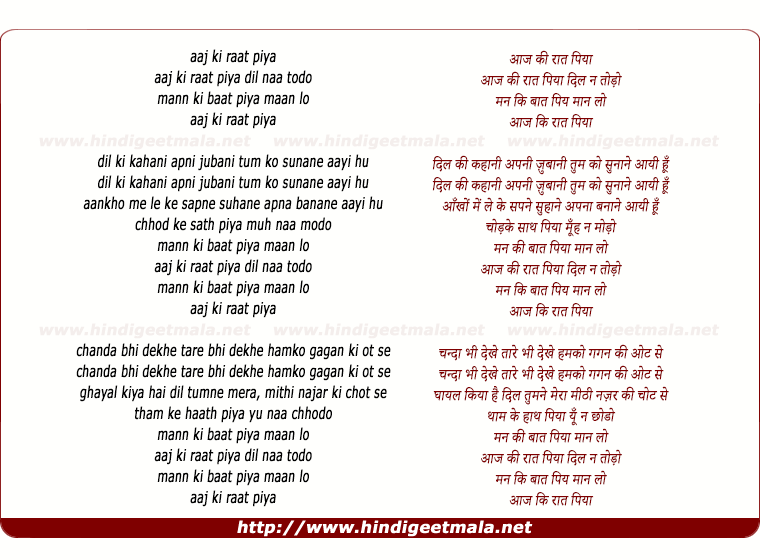 ravi7550 on Monday, March 23, 2015
Pandya has correctly said. Nothing looks old when you listen to these
songs.The same magic,magical composition,and voice,music every thing.
Time can never fade the sweetness & charm.
Ravi Sinha﻿

MEANER deen on Friday, September 09, 2011
THANKS FOR ALL INDIANS WHO UPLOADED TIMELESS BEAUTIFUL SONGS. I AM SO HAPPY
THAT I FORGOT MY ILLNESS. OLD SONGS ARE TRUE REMEDY FOR ILLNESS. THANKS FOR
LETTING ME HEAR THESE SONGS. I NEVER WOULD HAD A CHANCE TO HEAR THE SONGS
UNTIL GOOF HEARTED PEOPLE SHARED THEIR FAVORITE SONGS. ALL THE SONGS I AM
LISTENING BRINGS ALL GOOD MEMORIES OF MY LIFE. I AM A WESTENER BUT I WAS
SPEND MY CHILDHOOD AMONG INDIANS THANKS AGAIN AND MAY GOD BLESS EACH OF YOU