Video of this song from youtube
Average Rating : 4.40
Total Vote(s) : 967
Please rate this song between 1 star and 5 stars (5 stars being the best). Just move your mouse on the stars above and click as per your rating. Your rating will really help us to improve our website. 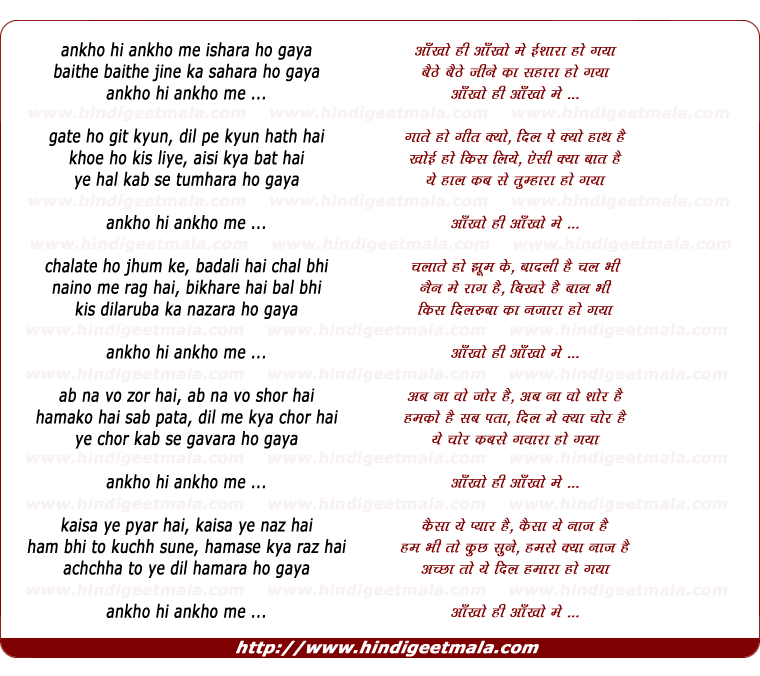 Comments on song "Aankhon Hi Aankhon Men Ishaaraa Ho Gayaa"
sonny19xx on Sunday, May 17, 2009
Top class ! Absolute melody by Shahenshah OPN sung beautifully by koyal
Geeta and King Rafi . Evergreen immortal hit . Dev and Shakila rock. Anyone
who is familiar with Bollywood knows this song though this song is 55 years
old. Unlike the songs of nowadays which are there today gone tomorrow. The
beauty of this song is that Rafi has only one line to sing which he keeps
repeating for every stanza but we dont ever get bored. We really wait for
his turn. That is OPN . THANKS A LOT shdwgrl

June G on Wednesday, March 03, 2010
@Venkykan1 Kalpana has acted in five movies starting with her debut film
Baazi by Guru Dutt in 1951. In all of the five movies she is paired up with
husband Dev Anand. Aandhiyan (1952) by Chetan Anand was her second film
where she played a character named Janki. In House No. 44 (1955) she plays
Nimmo who falls in love with gangster Ashok. Kalpana has also acted in
Chetan Anand's Taxi Driver (1954) and her last film as an actress was Nau
Do Gyarah (1957).

adityapandit on Sunday, March 23, 2008
Absolutely heart breaking song. Dev Anand at his best with Rafi Saab. Geeta
Dutt in her melodious voice. Its a song which every one knows. Great
picturisation too. And yes, dont forget Shakila ever. what expressions
she has showed all over.. sach much, aankhon mein eeshara karr diya :-)

sonny19xx on Sunday, February 10, 2008
A terrific song by the duo Rafi Geeta set to mind boggling music by OP. Dev
sweeps the viewers off their feet and Shakila is charming. The song is fast
paced and it is immortal. Every Indian must be aware of this song. These
are the kind of songs that defined Bollywood as it is known now.

TUFAIL HEERA on Saturday, October 23, 2010
He is now 87 years old, he is legend of film industry, very talented,
superstar, got natural talent, he lead the way, may God bless him good
health & long life, I wish he may complete his all desires, my prayers are
with him.