Video of this song from youtube
Average Rating : 4.50
Total Vote(s) : 13081
Please rate this song between 1 star and 5 stars (5 stars being the best). Just move your mouse on the stars above and click as per your rating. Your rating will really help us to improve our website. 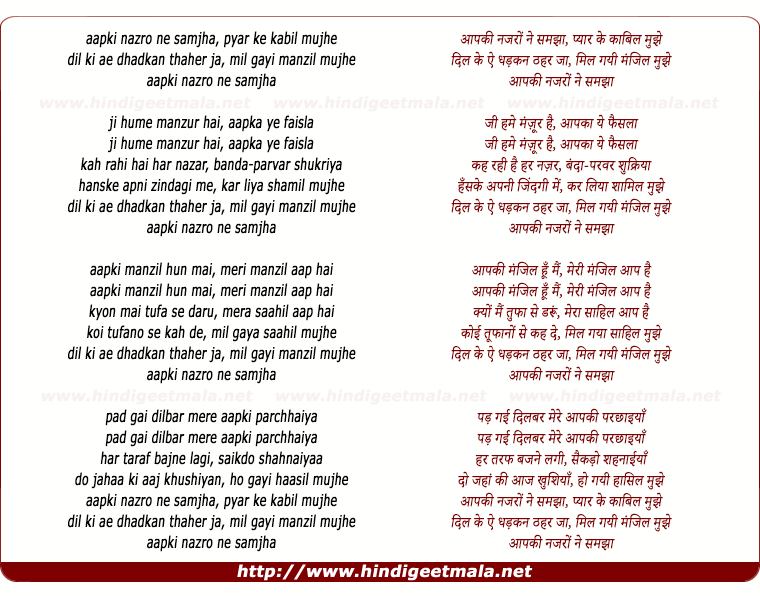 Comments on song "Aap Ki Nazro Ne Samjha, Pyar Ke Kabil Mujhe"
akkubaba on Sunday, September 05, 2010
This is the magical combination of Lyrics of Raja Mehdi Ali Khan and the music of Maestro Madan Mohan with the voice of Lata Ji. it is a wonderful masterpiece till eternity. Unfortunately I was not born in that era but my son who is 1 1/2 loves it. These songs will remain popular till eternity. This magical trio produced another master piece in mera saaya naino me badra chhaye song another masterpiece. Thanks for the upload
ssrbaqri on Monday, June 08, 2009
This phenomenal song represents the ultimate melody that the hindi cinema contains..the lyrics of the song is simply a literary stuff...and this wonderful sequence of words puts it above other songs of that era which sound melodious but lack the quality in lyrics..its a song that is one amongst those closest top my heart
thanks for uploading a lyrical beauty

Anup Setty on Friday, November 20, 2009
This song is very heart touching and romantic: I found this from Wikipedia,
itneresting fact, I didn't know all along... Mala Sinha was born to Albert
Sinha, in a Nepalese Christian family. They named her Alda. Her friends at
school used to tease her calling Dalda (a branded vegetable oil of India),
so she changed her name to Mala.


5jeeves on Tuesday, August 31, 2010
Agreed it was Lata's magical voice but it was Mala Sinha who gave that voice a face. How sad this actress was never acknowledged to this day by the Bombay Film Industry with a single award, despite acting in so many great films like Bahurani, Suhagan, Nai Roshni, Aasra, Dhool ka Phool, Gumrah, Dharmputra, etc etc
ram70 on Friday, May 08, 2009
My girl friend in the early 90s and now my wife of two kids asked me what
my favorite song was and my reply was this one-THis is an ageless, timeless
classic and takes listeners to a totally different world-I hope the younger
generation listens to these songs and realize what they have been missing