Video of this song from youtube
Average Rating : 4.35
Total Vote(s) : 159
Please rate this song between 1 star and 5 stars (5 stars being the best). Just move your mouse on the stars above and click as per your rating. Your rating will really help us to improve our website. 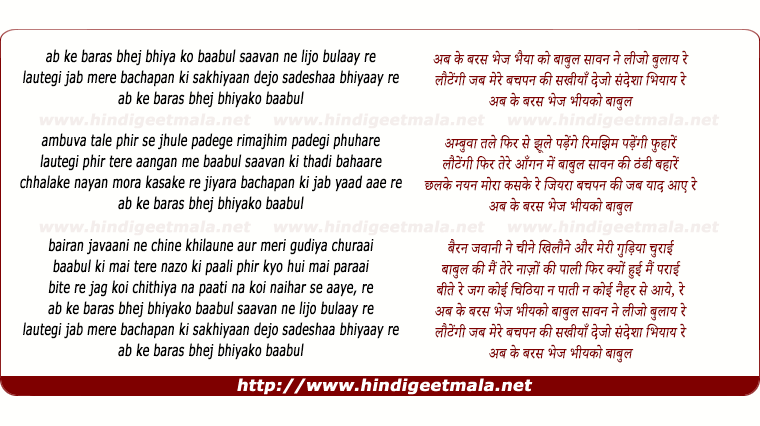 Comments on song "Ab Ke Baras Bhejo Bhaiya Ko Baabul"
mastkalandr on Saturday, March 19, 2011
Truely said.. They are indeed a magical trio.. I would like to appreciate you for your love for music.. I truely admire your classical background.. continue the good work..
Thanx for sharing..

nandu1f on Friday, May 08, 2009
I wanted to share this video with my son daughter (who have grown up
outside of India) to enjoy the intense sentiments played out by Asha within
Bimal Roy's incomparable movie-making. But the shameful comments by by some
immature and unthinking listeners precludes that option for me. I am sure
most other listeners feel the same way. I don't know how to delete those
tasteless comments. Bellztoll ji, can you please upload this video again to
remove their dirty smudges?

P.K. ANILKUMAR ( HINDI MELODY BYTES ) on Saturday, September 12, 2015
Bandini was the tenth highest grosser of the year and was declared a 'Semi
Hit' at the Indian Box Office, though it received not just critical acclaim
but also sweeped that year's Filmfare Awards, winning six awards in all
including the top awards of Best Film and Best Director, as well as Best
Actress, and is still considered a landmark movie of the 60s, especially
being last major outing of film director Bimal Roy, a master of realism..
Thanks for sharing ..﻿

TheNetRoamer on Tuesday, February 22, 2011
A very touching song from a very touching movie - a tale of a sufferings of
an Indian woman who has been imprisoned and is longing for freedom. I have
listened to this number a couple of time as well as the original track of
Asha jee. The comparison of two performances of these two artists is no
less touching. Nowadays we rarely come across this type of songs and
accompanying music .Congrats Jay jee for this fabulous selection and doing
justice to it.