Video of this song from youtube
Average Rating : 4.37
Total Vote(s) : 75
Please rate this song between 1 star and 5 stars (5 stars being the best). Just move your mouse on the stars above and click as per your rating. Your rating will really help us to improve our website. 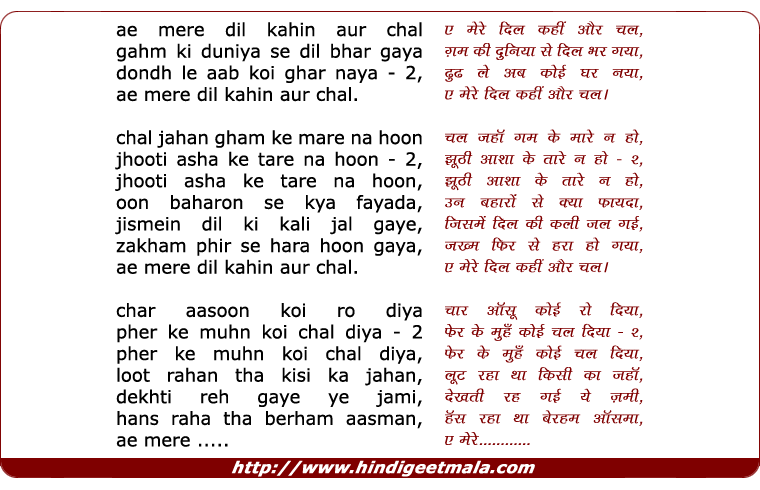 Comments on song "Ae Mere Dil Kahin Aur Chal (Fast Version)"
rumahale on Sunday, December 09, 2012
Memorable presentation - an evergreen classic in the landmark that needs no
introduction. I am mentioning about the movie and the song. It is nice of
you in taking all possible initiatives to preserve the treasures. The
present day generation has scant respect to appreciate the contribution
from the legends. Thank you.

RealMusicKing on Monday, March 05, 2012
Hello Yuan and thank you very much. This, slower version is hardly recognised by any Talat or Dilip fans. The faster one was a smash hit. This was was also sung by Lata in slower and in sad mood. Lyric of this was by Shailendra. Hum Dard Ke Maron Ka and Koi Nahin Mera Is Duniya Mein were penned by Hasrat Jaipuri. Regards
chandrashekharjain on Friday, August 20, 2010
Very melodious song by Talat Mahmood
And picturized on the tragedy king Dilip Kumar
Thanks for sharing


srnath123 on Thursday, July 02, 2009
As a music lover who has listened to them for years (including thousands of
songs Yesudas has sung in 4 south indian languages) , there is no doubt in
my mind that these three are in the same league. One cannot say who is the
best though. Talat excelled in soulful rendering, Rafi in melodies and
Yesudas in totally difficult classical based compositions. But hey, to each
his own. We can agree to disagree. and a 7 time national award winner
doesn't need my plug :)