Video of this song from youtube
Average Rating : 4.44
Total Vote(s) : 9
Please rate this song between 1 star and 5 stars (5 stars being the best). Just move your mouse on the stars above and click as per your rating. Your rating will really help us to improve our website. 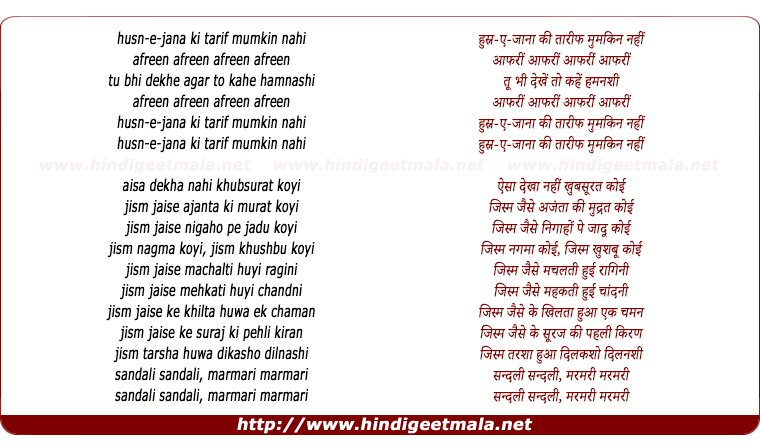 Comments on song "Afreen.... Husn-E-Jana Kee Tarif Mumkin Nahee"
haqnuma on Thursday, December 20, 2007
when one listens to sufi music one gets tranformed into an ecstatic world of oneness with the Almighty.
GtemE on Sunday, February 11, 2007
Continue I don't know why we don't take care of the gift is given to us on
time, Why his surroundings did not take care of his treatment on time. This
is the lost for the world. This kind of gift we have very rear, may be in a
century. As we can mention about Mozart, but that was not in our life time.
Good thing is we have his so many songs. In which he is alive. It is him.

man4woman on Saturday, April 21, 2007
GOD bless this most beautiful soul that had touched the hearts of many like
me. The late Nusrat Fateh Ali Khan was a poetic & musical GIFT to us
all.lets all enjoy this GIFT whilst we like him have to say bye to this
'dunia' one day. Baljeet Singh MALAYSIA

GtemE on Sunday, February 11, 2007
The spiritual touch I feel in me when I listens his music, which simply is
not possible to express in writing. I don't care which religion he is from,
but the spirit with in him, and in his song is from the root of all
spirituals sources.