Video of this song from youtube
Average Rating : 4.46
Total Vote(s) : 958
Please rate this song between 1 star and 5 stars (5 stars being the best). Just move your mouse on the stars above and click as per your rating. Your rating will really help us to improve our website. 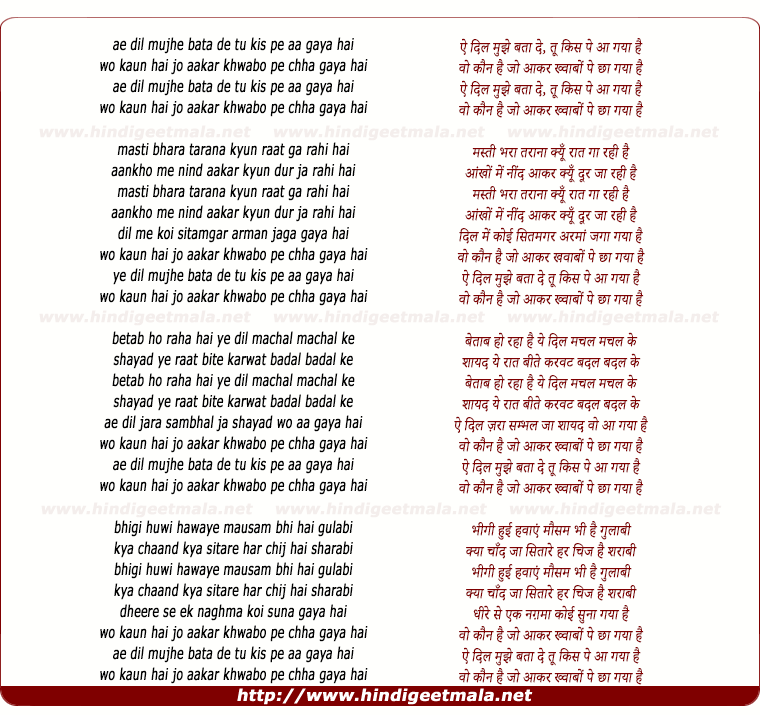 Comments on song "Ai Dil Mujhe Bata De, Tu Kis Pe Aa Gaya Hai"
RealMusicKing on Saturday, May 08, 2010
To survive in the vicinity Meena Kumari, Madhubala, Nargis and Nutan was not an easy task. Those four ladies swept away the rest, at least during 1950's. Come 1960's, more new faces appeared and that pushed Shyama behind the silver screen. But she was a very good actress. Her expressions were very natural. She played heroin roles starting early 1950's such as Shrimatiji (music by S. Mohinder) and Hum log (music by Roshan) and some other movies.
RealMusicKing on Wednesday, April 28, 2010
The tune of this song was taken from a western tune called "Morning in Portugal"
P.K. ANILKUMAR ( HINDI MELODY BYTES ) on Wednesday, September 16, 2015
this gem of a song owes a lot to Geeta Dutt's magical singing. Minus that,
I would hate to even say that this is the music of the legend called Madan
Mohan It is so run-of-the-mill type Secondly, regarding Geeta Dutt-Guru
Dutt tragedies, this is indicative of the frailties & fragility of life &
human relations. Remember, the famous Nida Fazli's " कभी किसी को मुकम्मल
जहाँ नहीं मिलता
कहीं ज़मीं तो कहीं आसमां नहीं मिलता ". Also, MastKalandarji, keep up the
good work; you have already done such a lot !! Your passion has given so
much of happiness to thousands like me﻿

TUFAIL HEERA on Wednesday, July 30, 2014
I would like to say that Madam Shyama was Great Legend Actress of Indian
Films, her original name is KHURSHID AKHTAR. Further Mr. Vijay Bhatt, Film
Producer has given her Filmi Nmae SHYAMA. She was giving extra ordinary and
so beautiful face expressions. We cannot compare this Gorgeous Superstar
with anyone regarding her mind blowing acting and superb terminology. She
is my most favorite artist. I always respect this Artist. Furthermore, her
all sort of songs reaches to the hearts of music lovers without any
resistance. Certainly she was great legend performer of all times. Thank
you very much for Excellent Video Presentation and So Beautiful upload.﻿

Partha Sur on Saturday, May 15, 2010
Yes it is a great tragedy. Guru Dutt was not only a very good actor with a
very "natural" style (like Ashok Kumar) but also a brilliant director. In
my humble opinion the equal of Satyajit Ray, Mrinal Sen and Shyam Benegal
and better than all his contemporaries in the Bombay film industry.
"Pyaasa" is my favourite Hindi movie and "Mr and Mrs 55" is the most
sophisticated Hindi social comedy I have ever seen - a Mudhubala
masterpiece.