Video of this song from youtube
Average Rating : 4.44
Total Vote(s) : 200
Please rate this song between 1 star and 5 stars (5 stars being the best). Just move your mouse on the stars above and click as per your rating. Your rating will really help us to improve our website. 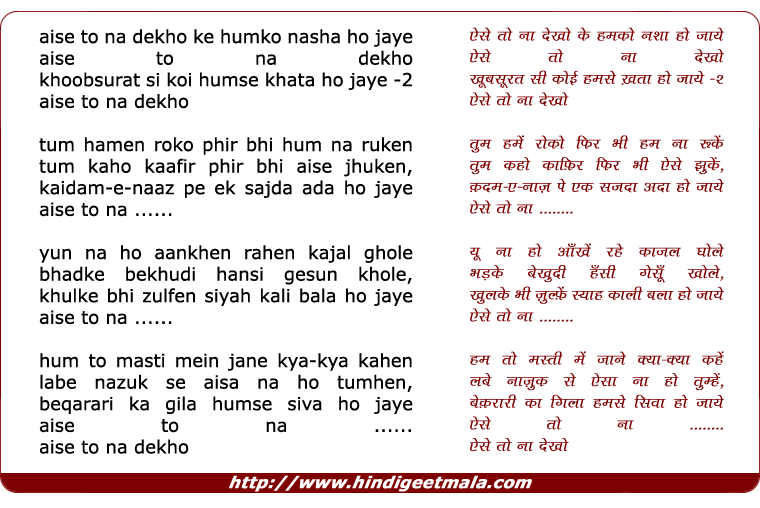 Comments on song "Aise To Na Dekho Ke Humko Nasha Ho Jaye"
aloke lal on Tuesday, March 02, 2010
Awesome song, amazing rendition by Rafi saab..and an absolutely charming
couple on the screen. What a heady mix is this!!!!!!!!!!! I can hear this
song a million times.

Rmehtacpa on Tuesday, December 16, 2014
Must say, only music carried this entire film all the way, all the songs
being hit. Otherwise, in spite of the top star casts, the movie almost
flopped.﻿

Sharon Solomon on Thursday, August 25, 2011
look at Dev Anand. what a brilliant piece of work. completely in the mood.
the eternal loverboy of Bollywood. Rafi is Rafi. gentle and magical...

Sunil Kapoor on Tuesday, September 13, 2011
Rafiji U were one of kind singer won't any boddy like him ever God bless
his soul.

purutoke on Friday, August 12, 2011
Hats of to rafi saab, devsaab and Burmanda for this beautiful and melodius
song.