Video of this song from youtube
Average Rating : 4.45
Total Vote(s) : 91
Please rate this song between 1 star and 5 stars (5 stars being the best). Just move your mouse on the stars above and click as per your rating. Your rating will really help us to improve our website. 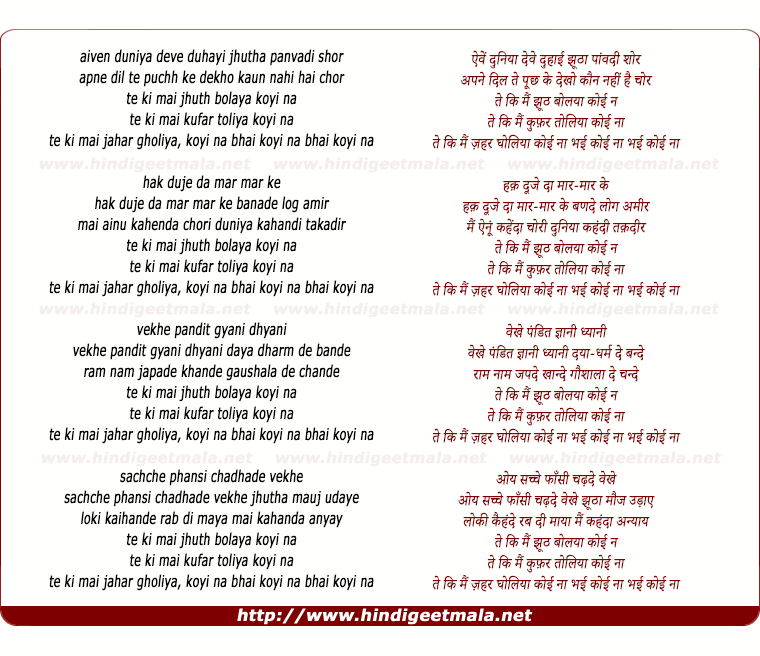 Gasper Agacy on Tuesday, September 13, 2011
@gugs76 This style of bhangra is called "Jhumar" which till few days back
was almost dead. but than to an old dancer of this style and Ludhiana
Police who took bhangra as physical work out this style is alive and
growing fast. and the dancer is the other singer of this song Balbir, he
later married another dancer with Helen, Madhumati. he was a great dancer
of bhangra, waltz, twist and Flamenco and with that was a good singer too
and sang some great songs

reverseswing on Saturday, October 15, 2011
What a superb composition based on Punjabi music by a Bengali Music
Director Salil Chaudhry. That is Salil Chaudhry's versatality. He composed
the (masterpiece) song "Jagomohan pyare" in classical raag, "Haryala saajan
dhol bajata aaya (Do bigha zameen) in folk music, and "Jungle me mor
naacha" in Western style. Great artist with amazing talent.In addition to
this he was an intellectual and literary figure of Bengali language.

suresh verma on Sunday, July 25, 2010
Raj Kapoor's probably the best film, though not directed by him. He himself
gave a scintillating performance. Apart form this song, other two songs
stood out, Lata's 'Jaago Mohan Pyare Jaago' and Mukesh's 'Zindagi khwab
hai'. Motilal was excellent, as usual, in a cameo.