Video of this song from youtube
Average Rating : 4.21
Total Vote(s) : 62
Please rate this song between 1 star and 5 stars (5 stars being the best). Just move your mouse on the stars above and click as per your rating. Your rating will really help us to improve our website. 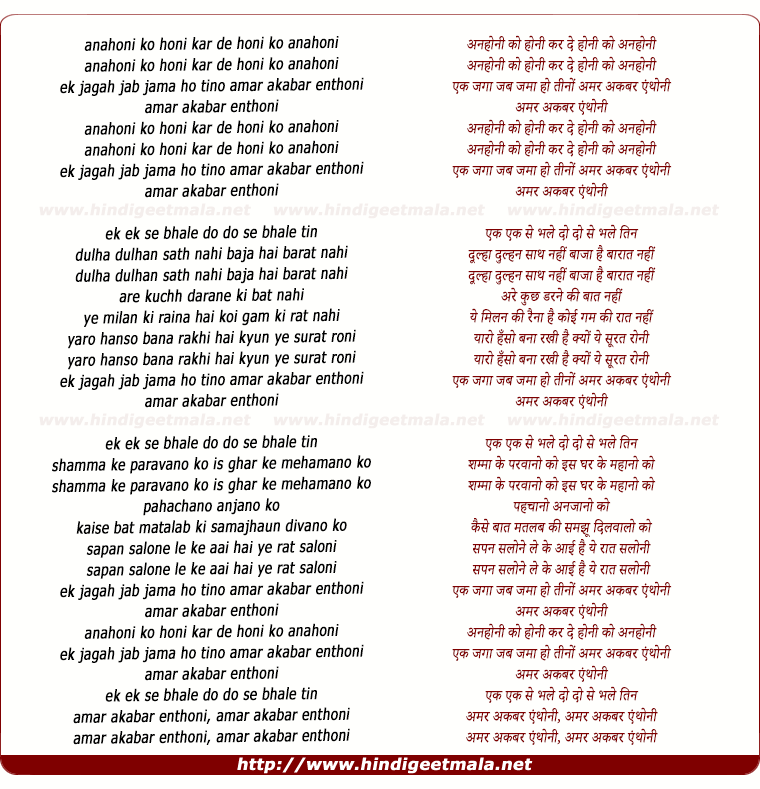 Comments on song "Anahoni Ko Honi Kar De Honi Ko Anhoni"
hobgoblin707 on Monday, February 09, 2009
Kishore Kumar for Amitabh Bachchan (first actor - Anthony), Mahendra Kapoor for Vinod Khanna (second actor - Amar), and Shailendra Singh for Rishi Kapoor (third actor - Akbar) . People commonly mistaken this song as having either Rafi or Mukesh. It doesn't. However, the other song in this movie (Humko Tumse Pyar Hogaya) has Kishore, Rafi, Mukesh, and Lata.
MAYOGARDENS on Sunday, July 11, 2010
I went to Bombay in 1977 and saw this movie. Storey and music was so powerful that I fell in love with the movie. I went back to Lahore with the memories of this movie. ( this was the time before VCR ) Then In New York I watched on VCR and later on DVD. Now the magic is on YOU TUBE. Lahori Munda From New York. Masterpiece.
Prashant Akerkar on Monday, May 28, 2012
I would love to see a remake of this film similar to Agnipath. I would like
to see the three Khans in this movie whom i like personally for their
acting skills.. Amir Khan in the role of "Amar", King Shahrukh Khan in the
role of "Akbar", Salman Khan in the role of "Anthony". Thanks & Regards,
Prashant S Akerkar


MAYOGARDENS on Monday, December 13, 2010
Great memories from the year 1977, when this Lahori Munda went to Bombay. I watched this movie after buying a ticket in black market from an old lady. Beautiful music and story. Now I am watching it on YOU TUBE. From the silver screen to the computer screen, the magic is same. Lahori Munda From New York
blacksportparis on Sunday, May 10, 2009
Such a great film, i saw when i was a kid ! This is definitely my favorite part of the film ! Too bad, you didn't let it play until the end, when the woman also sing with them in the car then, as they leave :)
But "chukria", anyway !! :)