Video of this song from youtube
Average Rating : 4.37
Total Vote(s) : 290
Please rate this song between 1 star and 5 stars (5 stars being the best). Just move your mouse on the stars above and click as per your rating. Your rating will really help us to improve our website. 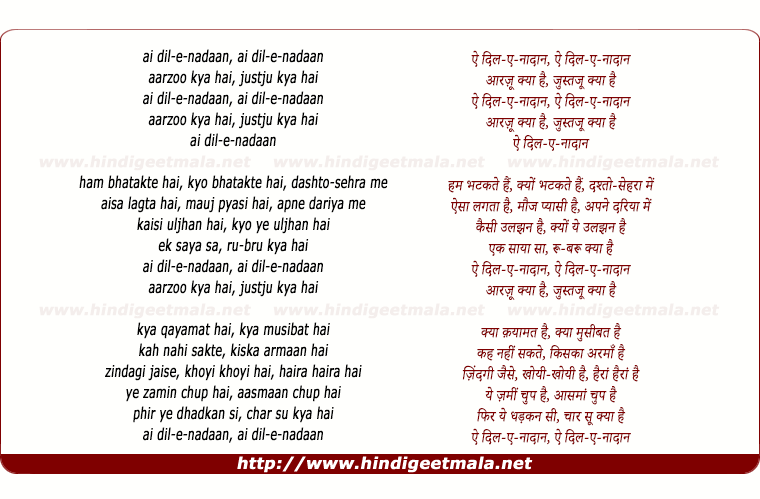 Comments on song "Aye Dil-E-Nadan"
sunderpak on Sunday, January 23, 2011
Historical Razia Sultana was a heroine of all the Subcontinent. Although she was under tremendous pressure since her coronation yet she managed to rule Dehli for three years until she made a gruesome mistake to join Malik Altoonia (the villan in this film). She was killed by robberers while fleeing from his brother's forces. May Allah rest her soul in peace.
Abdul Qudus on Monday, April 27, 2015
From Mahal to Razia Sultan, it was a long journey. However, even magicians
fail. Kamal could not bring back what he left with Pakeezah, just like
Aasif could not bring back the beauty of Moghul Azam. What a
disappointment.{Pl. feel free to disagree, after all that is how I think}.
I can quote other masters too, but would rather not.﻿

popy seed on Monday, October 05, 2009
This song is favorite song of Lata mangeshkar herself..I saw in an
interview on her b'day saying that ...she recorded that song and came out
of studio and keep on singing that song...she said this song is closest to
her heart of all songs.well and this song was written by javed akhtars
father...so baap to baap hi hota hai...

malikliaqat on Thursday, June 24, 2010
sublimation and desire but no lust makes this song immortal lyrical expression of inner human emotions with throbbing of heart ...just listen it in late night with closed eyes.
saeed akhter on Tuesday, January 21, 2014
this is not a song this is a heart beat///no one can sing like this no one
can write like this every can not undrstand r the feeling,,,,,i love it for
ever ,,,,,,,,,,the end﻿