Average Rating : 4.12
Total Vote(s) : 270
Please rate this song between 1 star and 5 stars (5 stars being the best). Just move your mouse on the stars above and click as per your rating. Your rating will really help us to improve our website. 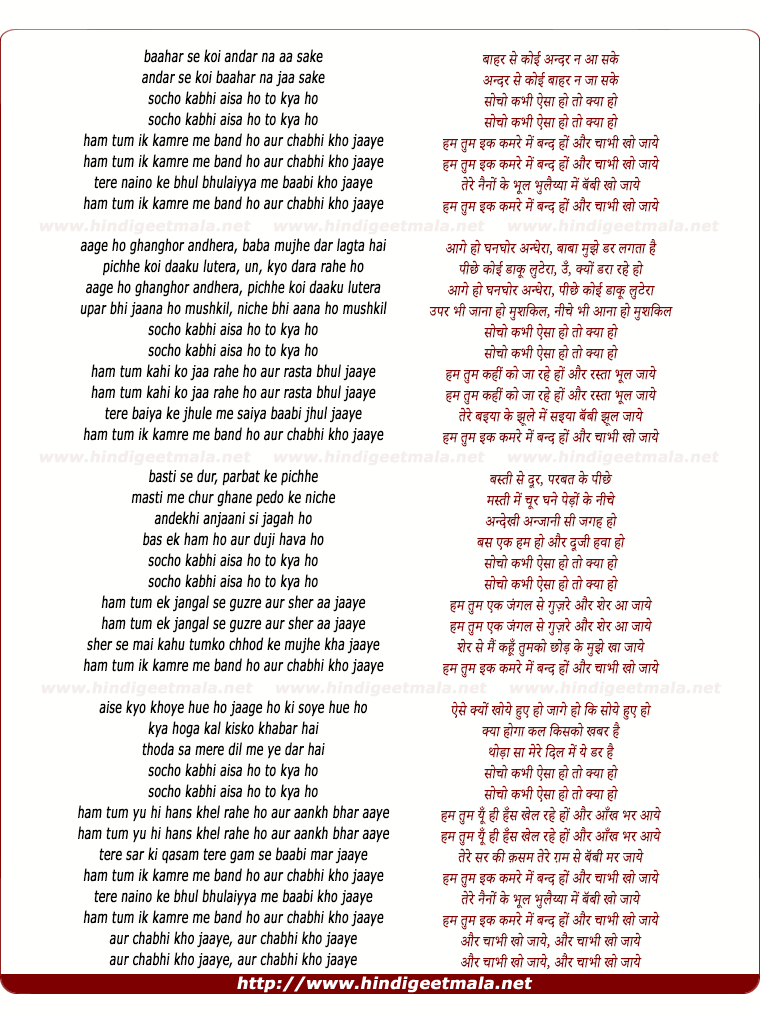 Comments on song "Baahar Se Koi Andar Na Aa Sake"
TUFAIL HEERA on Saturday, September 27, 2014
Currently I am working in Private Company, some time when our Office Boy is
in happy mode, he is always singing these romantic and lovely lyrics. The
same has reminds me about my young age, when we all friends were coming
back from School, we were singing this song in combined voices. That was
really great moments. Further it is very attractive song which is as
popular today as it was when released. The song is little bit different
very unique indeed. Because the both artists were willing that “THE KEY
OF THEIR ROOM WILL BE LOST”. The lovely lyrics are so simple but so
true. Thank you very much for keeping the Memories Alive through RARE
upload.﻿

bazlur on Friday, January 06, 2012
Raj Kapoor was very popular in soviet union, because all of his good films
dubbed with professional artists in Movie Studio in Moscow and Leningrad
and watched all over the Soviet Union in the 50's to until communism was
dead there. French movies were also very popular there and many Indian and
French, Italian movies dubbed and shown regularly all over the Soviet
Union. Thanks Raj Kapoor and his dad and all brothers and their kids for
their contribution to Indian culture

vim on Sunday, May 15, 2011
@ShemarooEnt, Please change the music director name.The music is by
LAXMIKANT PYARELAL (my favourite music director), and not Shankar
Jaikishan...and there is a lot of history behind the songs of this
movie.if u want i can narrate them..