Average Rating : 4.54
Total Vote(s) : 26
Please rate this song between 1 star and 5 stars (5 stars being the best). Just move your mouse on the stars above and click as per your rating. Your rating will really help us to improve our website. 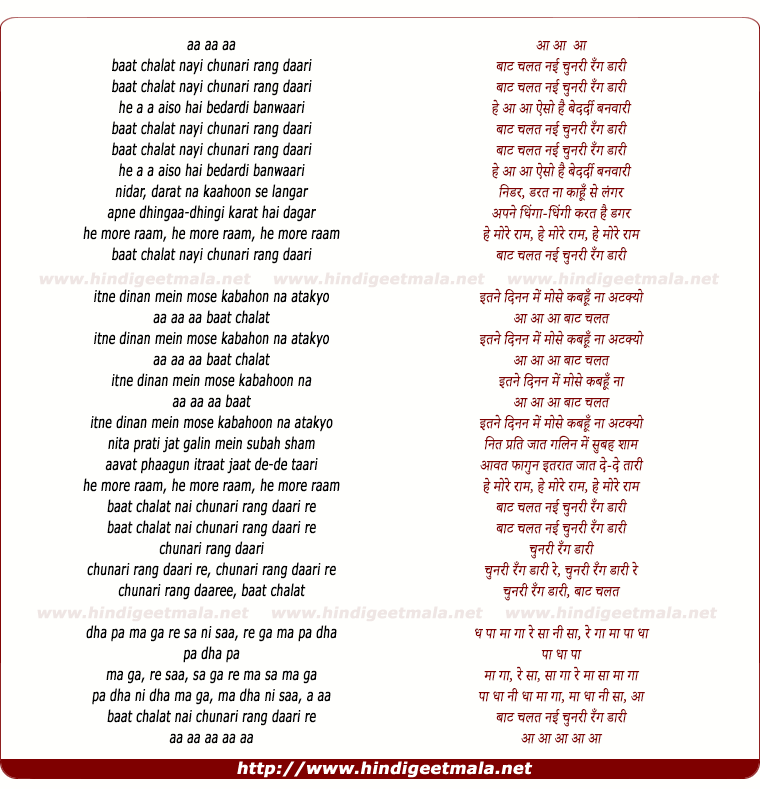 Comments on song "Baat Chalat Nayi Chunari Rang Daari"
milinddabke on Wednesday, September 08, 2010
simply speechless at the breadth and spectrum of rafisaab, the same man has sung 4 junglee, 4 jhonny walker, rock and roll, disco, ghazal, romance, senti, god god!!!!!!!!!!! and he is excelling against a classical maestro in this song, rafisaab u r the ultimate in playback singing, and i say plyback singing across male and female category
Milahi1935 on Tuesday, September 11, 2012
Krishna sang excellently and rafi matched him in the moorkian. In the end
rafi goes to the 4th octave so beautifully without any change in his voice
that one wonders at his abilities. Indeed rafi was gifted by the greatest
range that I have heard any where, even among the opera singers of the west.

Noniskia Noni on Wednesday, April 13, 2011
My Allah! What a voice you have given to Rafi Sahab, Wah Laajawab, has left
all other singers of Hindi music far behind after singing this most
difficult song.

Almas Kotwal on Thursday, June 02, 2011
Mohammad Rafi is probably the only singer that gets absolutely no negative
comments on youtube., he is my favorite singer

Rajesh Venkateshulu on Friday, November 23, 2012
You are absolutely right. They can only scream and cannot sing anything
that high or for that matter in low notes. I honestly believe there are no
singers in this world who can match Indian singers especially classical
singers in quality (Singing taans,high, middle or low notes and putting
soul into the song-which is the most important thing).